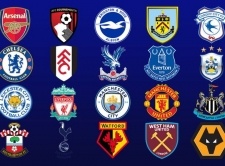 Twenty teams from England - and sometimes from Wales - compete in one of the toughest soccer league's in the world. Different from most North American sports, at the end of each season the three worst clubs are relegated to the Championship and are replaced by the three best from the second level. Through this method, we have new teams every season in England's Premier League.

Who will join the Premier League in 2019-20? Norwich City, Sheffield United and Leeds United battle not only for the Championship’s title but to finish in the top 2 positions, which guarantee direct access to England’s top tier.

West Bromwich Albion, Middlesbrough, Aston Villa, Preston North End, Derby County, Bristol City and Nottingham Forest fight to finish among the top 6, which drive them to the playoffs. The winner of this little knock-out competition will also be promoted.

Since the creation of the Premier League in 1992/93, a total of 49 clubs have played in England's old "first division", thanks to the promotion/relegation system. In the last five years alone, Aston Villa, Hull City, Middlesbrough, Norwich City, Queen's Park Rangers, Stoke City, Sunderland, Swansea City and West Bromwich Albion figured in England's elite.