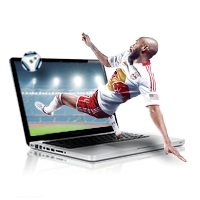 Following a promise, to FIFA by US Soccer, that they would form a pro soccer league in exchange for the right to host the 1994 World Cup, Major League Soccer was official launched in 1995 and play began in 1996. While the arrival of pro soccer on this side of the pond wasn’t without some difficulties, MLS fantasy soccer betting has provided a big boost to the popularity the Beautiful Game in North America.

MLS fantasy soccer games, in particular season long and daily contests, have attracted a new legion of fans to the most popular sport on the planet. Already the most heavily bet matches, everywhere outside of North America, soccer is now a popular choice for sports bettors in the United States and Canada. A quick glance at the betting boards at our top ranked sportsbook validates that point.

Whether bettors are participating in captivating full season contests, or the thrilling action of daily games, searching out securing the most strikers possible ranks very high on our list of top fantasy soccer tips. It’s a fact folks, there isn’t a ton of goal scoring in Major League Soccer or any of the roundball football leagues for that matter. Fantasy soccer scoring systems, particularly the ones offered by soccer royalty DraftKings, normally offer a generous ten points for every goal. Based on the fact there were only 937 goals scored, over the course of 340 matches during the MLS 2015 season, securing the top strikers needs to be a priority when selecting a successful fantasy squad.

Beyond top goal scorers, securing quality playmakers helps build a MLS Cup Championship style fantasy soccer squad. Assists are not very plentiful in soccer, especially when compared to numbers posted in NHL fantasy contents, which may be somewhat surprising to a casual soccer fan. That’s illustrated by the fact that only seven players registered ten or more assists during the 2015 MLS campaign – compared to 17 players tickling the twine with ten or more goals. During that season, the 16 helpers NY Red Bulls midfielder Sacha Kljestan posted led the league. Part of the reason for the low amount of helpers can be attributed to unassisted penalty kick goals. Bettors are advised to select playmakers with an urgency similar to the one employed when drafting their scoring studs.

At what stage of the draft owners select a goalkeeper can be the difference to winning and losing soccer contests. In order to be a fantasy MLS playoff contender, and since goalies receive a rather generous five points for every win, net-protectors need to be drafted prior to selecting any bench players in full season contests. Finally, since players are penalized for yellow and red cards received, plus fouls conceded, recognizing and avoiding undisciplined players gives bettors an edge in fantasy soccer. This is particularly true when selecting the bottom portion of a season long fantasy squad. The three goals, one assist and twenty shots recorded by Vancouver Whitecaps defender Kendal Watson, during his first 24 games during in the 2016 MLS season, looked decent for a sub-player. However, those points were offset some by seven yellow and three red cards officials gave him.

Bettors, who dedicate time and effort to crafting winning MLS fantasy squads, can translate that hard work into something more than just a return on their rotisserie soccer bets. Quality research, that includes team trends, rivalries, home/away records, player statistics and injuries, plus even the weather, should be rewarded as much as possible. You’ve researched the players and noted which studs are running hot, deciphered which stars are fading, all while hopefully uncovering a couple of “diamonds in the rough” along the way. Use that versatile knowledge to wager on LIVE soccer matches by surfing over to one of the trusted online sportsbooks here at Canada Sports Betting.