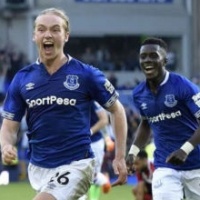 Everton are a club full of history, and are one of the most successful clubs in English football history. And while they are on the outside of the English Premier League's so-called 'big six' at the moment, they are never too far away from the top.

European qualification is also commonplace on the blue side of Liverpool, while there is always the chance of a long and successful cup run in both the FA and League Cups.

For that reason, it's never a bad idea to bet on Everton matches, and this is the best place to do it. From fixture information to scores and standings, we have everything you need to place a successful wager on the Toffees.

Throughout the season you will find information regarding Everton’s next fixture right here, with direct links to numbers that the popular sportsbooks have published. Be sure to check that you have got the odds you are looking for before you place your wager.

You will find Everton’s entire season schedule right here. Check out their latest results and take a look at odds for upcoming fixtures, or sort by home and away games to review trends and form. For past results, you can review lineups, match reports and statistics which will help give you the edge when deciding on your final bet.

Below you will find Everton’s current Premier League standings, updated after every matchday. You can toggle home and away fixtures, review offensive production, view defensive statistics and even check out how the Toffees’ first and second half performances differ. There is a wealth of information available to you right here.

Modern English Premier League fans might be surprised to learn that Everton was once the dominant force in the city of Liverpool given that Merseyside has been dominated by the Reds in the 21st century. But those who support the Toffees will know that they are one of the most consistent and successful clubs in the English top flight.

Everton have only been relegated from the first division twice in their history, and have spent more time at the top than any other English club. In recent history, Everton have done well to stay competitive in a league now dominated by the rich heavyweights.

Their key to success has been their identification of talent. Stars like Wayne Rooney, Romelu Lukaku and Marouane Fellaini all made a name for themselves at Goodison Park before heading off to Manchester United, while John Stones and Mikel Arteta joined Manchester City and Arsenal respectively.

While it may not be wise to place bets on the Toffees when they come up against the likes of City, Chelsea and Tottenham, they are certainly a consistent contender for 'best of the rest' and will more often than not get the points against the other teams in the Premier League.

Everton will also make short work of most group-stage opponents in the Europa League on the occasion that they reach Europe's second-tier competition. Look for these games to boost your winnings.

Everton's recent transfer dealings with Manchester United has created a new rivalry between the clubs. As the Red Devils are only a short drive away from Goodison Park, and have experienced resounding success in the Premier League era, it's unsurprising to see them as one of the teams Everton love to beat.

But if there's one team that Everton love to beat, it's fierce rivals and neighbours Liverpool. The Reds from Anfield are within walking distance, and matches between the pair are always great viewing.

The success of the two sides has made Liverpool the most successful city in England in terms of major honours and trophies, although the rivalry between the teams has been described as 'friendly' throughout. In recent times though, there has been a growing competitiveness on the pitch and more red cards than in any other English fixture.

In terms of betting, make sure you look out for draws, which are a common result in this fixture. As mentioned, booking can often be a feature of these derbies, so look for the over/under markets for yellow and red cards.

The top sportsbooks to use when betting on Everton are listed below.