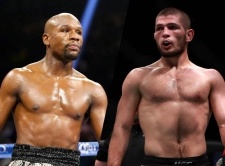 Both fighters are undefeated and are the best in their respective sport. But since this is Floyd Mayweather Jr.'s (-2000) sport, he comes in as a massive favourite. UFC champion Khabib Nurmagomedov (+900) is coming in as the biggest underdog in his career.

There is no doubts about this fight. Mayweather should easily defeat Nurmagomedov, who isn't a boxer but a wrestler. Expect Mayweather's price to keep going up, especially when the fight is officially made.

Mayweather Jr. should easily beat Nurmagomedov. It won't just be a regular victory. It will be an embarrassment. A clinic. A one-sided circus show. Even if he is 41 and is the lesser athlete, this is his sport. Nurmagomedov's strengths are in his wrestling and he won't be able to use any of that.

Nurmagomedov may have a puncher's chance. He has naturally heavy hands and a solid uppercut could floor Mayweather Jr. But given how Mayweather took punches from more powerful boxers like Shane Mosley and Marcos Maidana and soundly defeated them, Nurmagomedov will likely not do much to hurt Mayweather Jr.

Prediction: Fans will cheer for Nurmagomedov to shock the world and be the unlikely fighter to defeat Mayweather Jr. But it won't happen. Mayweather Jr. will get fancy in the opening rounds and "rope-a-dope' Nurmagomedov and once he's figured him out, will toy with him and easily defeat him via a blowout decision or a late T/KO.

Both boxing and UFC/MMA fans will be throwing money on this fight, but they are both one-sided. Mayweather Jr. will continue being bet down with a rare gamble on Nurmagomedov.

With Conor McGregor firmly behind him, reigning UFC lightweight champion Khabib Nurmagomedov is setting his sights on a "superfight" with Floyd Mayweather Jr. Nurmagomedov made McGregor eat his words by submitting him in the fourth rind of their championship fight early in October.

Nurmagomedov is unbeaten and got the entire world buzzing for both good and bad reasons. After he submitted McGregor, he and his team attacked McGregor and his camp. UFC President Dana White angrily reprimanded Nurmagomedov and the NSAC indefinitely suspended him and McGregor.

But that doesn't phase Nurmagomedov as he's focused on making an even bigger payday in fighting Mayweather Jr. And as much as White wants to castrate the Russian, he won't turn down an opportunity to land another money fight similarly to how he and the UFC co-promoted Mayweather Jr. versus McGregor.

Boxing and MMA purists will look down on this fight as another travesty. But they'll be among the first to purchase the pay-per-view or head to their local bar to catch this once-in-a-lifetime event.

This fight will generate plenty of buzz and some "easy money" for both pro and casual gamblers alike. Most of these Canadians turn to these online sportsbooks, who all provide legitimate customer service and signup offers while offering the best betting lines.