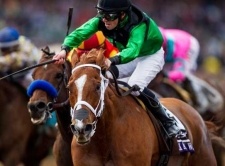 For fans of pure thoroughbred speed, the Breeders' Cup Sprint features the fastest of the fast. Carded as a six-furlong dash, the Sprint carries a purse of $1.5 million and puts the swiftest runners in the world against one another. The race is often one of the most anticipated matchups of the weekend with the top east coast talent taking on the best of the west with an occasional foreign invader also joining the fray.  [+]

Usually featured as one of the earlier races on Breeders' Cup Saturday, the Sprint has been known to produce large payouts in the exacta, trifecta and superfecta pools. The race is also included in multirace rolling exotics such as the double and pick 3. With the fattened pools that accompany Breeders'  Cup wagering, the Sprint is a great betting race that nearly always features a deep and talented cast of runners.

Betting the Breeders' Cup Sprint from the convenience of an online racebook allows players to enjoy the ease of wagering directly from a laptop or mobile device. In addition, these top racebooks offer increased profitability in the form of competitive loyalty, bonus and rebate opportunities, putting more cash back into players' pockets.

As the story goes, horse racing began with a simple premise that has endured over the years: my horse is faster than your horse. While all races are obviously won by fleetest of foot, the Breeders' Cup Sprint is a race of sheer talent and less tactic. Racing purists and general enthusiasts alike enjoy watching the explosiveness of the sprint. With just three-quarters of a mile separating the gate from the wire, bettors get to see their action played out in about a minute and eight seconds. In a sport based on adrenaline, what could provide a bigger rush?

Betting the Breeders' Cup Sprint can be a tricky proposition, but with the right strategy, players can cash big tickets. In sprinting the name of the game is pure, unadulterated speed. With so much elite gate speed signed on each year in the biggest sprint race of the year, things can get a little congested in the early going. If a pure speed horse stumbles slightly or misses the break, they probably won't have a chance to recover against such a talented field.

This often means that players must begin their preparation analyzing how the break and the first quarter mile is likely to be run. Many pure speed horses are often overbet in the Breeders' Cup Sprint, while the closers and stalkers typically represent the most value. In many cases, the early fractions of the race are so fast and so contentious that many well-bet horses fade from contention when the real running begins. Race dynamics play a huge part in betting the sprint. The point is not to toss all speed from exotic tickets, but to eliminate second tier speed and focus on horses likely to be running strong in the late stages.

No trainer has dominated the Breeders' Cup Sprint quite like Bob Baffert. Known as the "White-haird Wizzard," Baffert has long performed excelled while performing at racing's top levels, producing Kentucky Derby, Breeders' Cup Classic, and many other stakes winners across the board, but his legacy in the BC Sprint adds another impressive accolade to his Hall of Fame resume. Baffert has won the BC Sprint five times with four different horses: Drefong (2016), Secret Circle (2013), Midnight Lute (2007 & 2008), and Thirty Slews (1992). Likely owing to his beginnings as a quarter horse trainer, Baffert is always a good bet in the Sprint.