The most recent, the 2019 Miss Universe, was won by the South African candidate Zozibini Tunzi. Her victory marked South Africa's third win in the competition, having recently won it in 2017.

Tonight a door was opened and I could not be more grateful to have been the one to have walked through it.
May every little girl who witnessed this moment forever believe in the power of her dreams and may they see their faces reflected in mine.
I am #MissUniverse2019. pic.twitter.com/gMkjmVCabo

The 69th edition of the Miss Universe competition will take place in late 2020, with Zozibini Tunzi crowning the new winner. As of the 8th January 2020, 3 delegates have been selected to participate in the competition. The 2020 edition will see the debuts of Uganda and the return of Ghana, which hasn't competed since 2018.

As soon as the odds become available we'll post them immediately on this page, so stay tuned. Miss Universe 2020 odds last yupdated January 8, 2020:

Odds will be posted here.

Odds & Insights: The Oscars 2020
The Irishman, The Joker who will it be?
READ MORE
Free Entertainment and Sports Picks
Who will take home the big prizes?
READ MORE
Esports Betting Odds
DotA, LoL, CSGO
READ MORE

Carole Morris, the second Miss USA to be crowned Miss Universe when she won in 1956, is also the lone Miss Iowa to have won the Miss USA contest.

Trump was in the middle of one of the pageant’s major controversies in 2002. He fired Russia’s Oxana Fedorova for not fulfilling her duties as Miss Universe and replaced her with runner-up Justine Pasek of Panama.

Past winners who’ve gone on to make a name for themselves include 2004 Miss Universe Jennifer Hawkins, who hosts Australia’s Next Top Model. Miss Universe 1980 Shawn Weatherly went into acting and appeared in the Police Academy movies and on the original Baywatch series. Laura Dutta, Miss Universe 2000, became a Bollywood star in her native India.

When it comes time to wager on the pageant, all of the Miss Universe top picks can be played at Canada Sports Betting. Whether you want to play moneylines, props, or make a future book wager, all the best odds can be found by clicking on our site.

Unlike many events available for wagering purposes, competitions like Miss Universe don’t tend to be placed on the front burner when it comes to the latest news and trends within the proceedings.

Successful wagering on Miss Universe or any among this type of pageant competition is going to require a bit more effort and digging for information on the part of the bettor to seek out the Miss Universe betting odds.

But the reward will be that you’ll be more informed of the goings on within the competition, and that can provide the betting edge leading to a winning wager.

On the surface, wagering on Miss Universe might seem to be a crapshoot to the novice bettor.

Most years, there are more than 80 competitors in the event. All of them are first-time entrants, so unlike sporting events, there’s no real track record to take into account when assessing potential winners.

However, there are insights that can be gleaned to enable a bettor to narrow down the field.

For instance, while the majority of contestants will have won their way into the competition, some nations choose their representative from casting calls, or simply appoint a winner. The chances of these competitors beating out pageant-hardened veterans is unlikely.

Pageant Planet (@pageantplanet on Twitter) is an established site that tracks the pageant industry and stays on top of the news and trends within the industry. It’s a great place to learn the background of Miss Universe competitors and how they earned their way into the event.

On YouTube.com, the aptly-named Miss Universe Predictions, delivers exactly what its title promises. There are breakdowns on each year’s competition and regularly-updated coverage of the contenders and odds, with predictions on the outcome.

As the event draws nearer, the leading online sportsbooks will begin to list future book odds on who will be crowned the next Miss Universe.

Pay attention to these Miss Universe top picks. While pageants may not seem like a big deal to some, sportsbooks put just as much emphasis on setting the entertainment odds as they would for any betting market.

As with any betting line, oddsmakers do not enter into their prognostications lightly. Much research will be put into the potential outcome. Generally, they’ve got a pretty fair handle on the contenders, and the winner will come from among the top favorites.

As the No. 1 pageant on the planet, Miss Universe draws blanket coverage from the leading entertainment magazines, websites and television shows.

Publications like People Magazine, web pages such as Radar Online and television shows including Entertainment Tonight and E! Entertainment are all reliable sources for Miss Universe news. And don’t forget the pageant’s official web page, MissUniverse.com.

Perhaps the most infamous moment in Miss Universe betting history victimized bettors who’d backed Miss Colombia Ariadna Gutierrez to win the 2015 pageant at odds of 7.50. Host Steve Harvey originally announced to a worldwide TV audience that Gutierrez was the winner.

In fact, she was the first runner-up. Pia Wurtzbach of the Philippines, the co-favorite at 6.50, was the winner. Harvey was forced to quickly backtrack and correct his announcement.

The United States representative is always a contender. Two of the first five and three of the first nine Miss Universe winners were Americans. It’s a rare occurrence when the USA entrant isn’t through to the semifinals and usually, are one of the last six left standing on stage when the winner is announced.

Watch Dayanara Torres and the 1993 Miss Universe contestants during the evening gown portion of the competition! 🤩 pic.twitter.com/NlJxUcq1F6

Venezuela is another strong performer. The Venezuelans were the first country to produce back-to-back Miss Universe winners when Danaya Mendoza was crowned in 2008 and Stefania Fernandez in 2009.

Puerto Rico is a nation that always seem to deliver a competitor who will rank among the challengers in the Miss Universe betting odds.

In recent years, Colombia has emerged as a Miss Universe powerhouse. The Colombian entrant can never be counted out when it comes time to consider where to place a Miss Universe wager.

European and African countries haven’t fared nearly as well over the years.

Sweden is the most prominent of the European nations in the annals of Miss Universe competition.

France and Finland have also provided multiple winners but in truth, it’s rare that a European woman is among the final three.

The country to watch from the Western Hemisphere is the Philippines. The women of this nation are always highly considered among the Miss Universe top picks, for a valid reason. They deliver the goods. The odds are pretty solid that you’ll find the contender from the Philippines still standing on stage as the winner is about to be presented the crown. 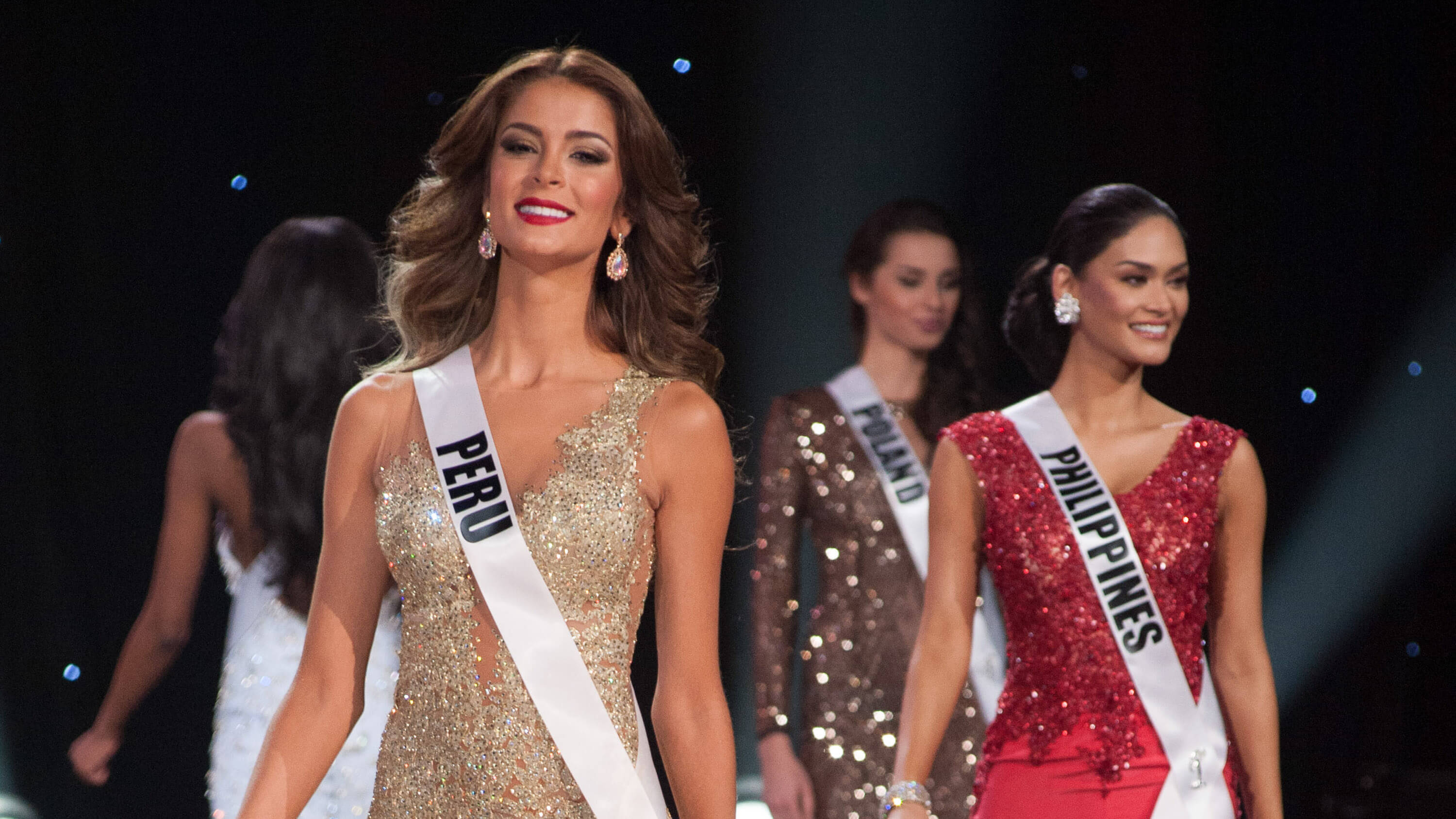 While the swimsuit and evening gown segments remain part of the competition, organizers of Miss Universe have taken great pains to emphasize that the event is much more than a beauty pageant.

Besides looking the look, they insist that the woman who ultimately wears the crown must also walk the walk and talk the talk.

They cite the need for the winners to be intelligent, well-mannered and cultured. Miss Universe must be confident, able to articulate her ambitions, demonstrate authenticity and credibility and exhibit grace under pressure.

Though the final segment is televised, the journey to determining who is Miss Universe is a week-long competition.

A preliminary round narrows the field from its usual 80-90 competitor starting point down to 20 semifinalists. Each entrant gets to make an opening statement to the judges as part of this elimination process.

Throwing back to fifty years ago when Gloria Diaz became the first Filipino Miss Universe in 1969. 💫 pic.twitter.com/MrQzVsPgsM

The semifinalists are comprised of four competitors from each area of the world - Africa,  Asia-Pacific, Europe, and the Americas. Four wild card entries, who can come from any area of the world, are also included among this grouping.

Following the semifinal round, judges will narrow the field to six competitors for the final round.

The question and answer segment has become an integral part of determining the winner. Women who do poorly in this portion of the competition recognize that the crown won’t be landing on their head.

Each of the six competitors left standing select a judge at random, who then poses a question to the contestant that will deal with a social, cultural or political topic of the day.

This gives each competitor the chance to show their ability to articulate a thoughtful answer, as well as display how they can think on their feet and handle the stress of being in the spotlight and placed in a pressure situation.

The field is pared down to three contestants for what’s billed as the final look. The competitors walk the stage one more time in front of the judges, who tabulate their final scores.

“It doesn’t matter what other people are saying to you. You really just have to stick to what feels right to you, whether it’s a pageant or anything else in life.” @MissUniverse 2012 @OliviaCulpo 🙌 #InternationalDayOfTheGirl
Powered by: @instyle & @powerwomentv pic.twitter.com/TOImEotBpp

Each judge ranks the remaining contestants from 1-3. The competitor with the lowest cumulative score is the winner. In the event of a tie, the contestant with the better semifinal score is declared Miss Universe.

There are also prizes awarded for the best National Costume, Miss Photogenic, and Miss Congeniality. Miss Photogenic is determined via an online voting process.

All of the leading sportsbooks will offer odds on a major event such as Miss Universe. It’s the Super Bowl of pageants, after all.

Top online sportsbooks such as Sports Interaction will provide lines on the event as it draws closer to the date of competition.

Betting on a competition like Miss Universe is not an exact science. Winners can come from off the board, such as the 2018 victory by Catriona Gray of the Philippines at longshot odds of 67.00.

Since even the odds on the favorites tend to pay well, usually between 6.00 and 7.00, a wise way to play the Miss Universe betting odds at a sportsbook like Betway would be to make three smaller wagers on a couple of favorites and a longshot.

As the day of competition nears, check with a sportsbook like Bovada for prop wager offerings. Some props likely to be available will be the region of the winner, and total wagers on the winner’s height, weight and age. There will likely even be a prop play on whether Harvey will once again announce the wrong winner.

Use A Bonus To Bet On Miss Universe Odds

You’ll find that the odds on the Miss Universe predictions at the various sportsbooks to be relatively comparable. You might locate a tick of a difference in the lines from sportsbook to sportsbook but in general, the oddsmakers tend to follow suit with their betting markets.

That being the case, why not seek to beef up your Miss Universe betting odds experience by gaining an added bonus?

Without fail, almost every leading online sports betting site offers a sign up bonus to entice new customers to pick them as their sportsbook of choice. That being the case, you might as well take advantage of this opportunity to capitalize via your Miss Universe top picks.

Before joining any sports betting site, compare the offers and determine which bonus best suits your wagering desires. Are you looking for a matching sign up bonus? Some sportsbooks will entice new clients by offering significant 100 percent matching bonus packages.

Others will offer a no-risk first bet. Considering that the Miss Universe pageant winner isn’t as easy to call as other events, you could take a flier on a longshot via a risk-free bet. It might pay off handsomely, but either way, you can’t lose.