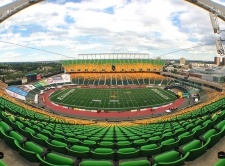 Also known as The Brick Field at Commonwealth Stadium, the stadium has been synonymous to a paradise for Eskimos fans thanks to the unbridled success of their team. It is an open-air all-seater multipurpose stadium designed primarily for football. The stadium is the largest in the CFL in terms of seating capacity with 56,302 and before 2010 was the only venue to use natural grass. [+]

It has undergone renovations and expansions four times and is more than on par with modern stadiums today.

The stadium has undergone a series of facelifts through the years. It first expanded in 1982 and again in 2013. In preparation for the 2001 World Championships in Athletics, the stadium upgraded with a new facade, concourse enlargement, improved lighting, a new scoreboard and an all-new all-weather running track. FieldTurf replaced the natural grass surface in 2008 and finally in 2010 upgraded all of its seating.

The Argonauts may have the most Grey Cup titles but the Eskimos are the CFL's dynasty franchise. Founded in 1949, the Eskimos have won 14 championships between 1954 to 2015 including a three-peat between 1954 and 1956 and an un precedented five consecutive between 1978 to 1982. They also hold the North American pro sports record in playoff clinching for a staggering 34 consecutive seasons between 1972 and 2005. On top of that, they have the most division titles in modern era with 21. And they may have more championships coming soon.

The Commonwealth Stadium isn't too close to too many hotels but it is a short drive from where the brunt are. The Matrix Hotel is 3 kilometers away and is one of the highest-rated hotels nearby with a stylish interior, delicious breakfast and complimentary wine and cheese on top of being close to the LRT. The Westin Edmonton likewise has good food and is within walking distance to the city centre mall and casino. Perfect for tourists. The Coliseum Inn is the closest to the stadium and good for its reasonable price.