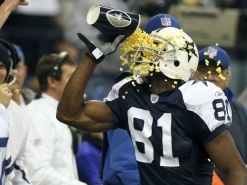 The art of the touchdown celebration has brought the purest form of joy to hundreds of millions of football fans, who share in the triumph of their favourite teams and players. After the National Football League’s fun police decided to add a 15-yard penalty for celebrating in 2006, the art has started to wane, leaving fans wanting more. Nonetheless, the landscape is not completely barren, with the occasional tour de force TD celebration still premiering on TV, before uploaded to the internet for an eternity of appreciation.

In terms of competitive value, the touchdown celebration is a psychological weapon that some teams were able to deploy effectively prior to the yardage penalty. This meant that the NFL essentially views celebration as a form of taunting, regardless of context. As a result, the boost in momentum that a team gains from a solid touchdown celebration has been reduced.

Momentum swings play a big part in any football game, something that anyone who bets on the NFL should know. Despite the fact that players and coaches train hard to ensure that they’re physically prepared to play, the mental side of the game, including momentum shifts, plays an intangible role that can make the difference between holding an L or earning the win.