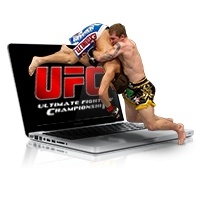 Do you wanna fight? Come on, fight me! That is certainly the mantra surrounding the ever-growing list of Mixed Martial Arts organizations. Through it all however, the Ultimate Fighting Championship crew are still head and shoulders above the fray when it comes to fantasy MMA betting action. Already popular, due to the flurry of fists and feet that fly in the octagon, the fantasy component has elevated UFC interest.

Stepping into a cage to fight Demetrious Thomas or Conner McGregor would not be easy or smart. Conversely, thanks to tons of recent innovations, fantasy MMA sign in is quick and simple. Whether the fight card is focused on King of the Cage, Bellator or UFC action, fantasy suppliers and highly ranked online sportsbooks have bettors covered from pillar to post in the rough and tumble MMA.

Fending off all-comers, UFC MMA fantasy fighting remains as the gold standard when it comes to action in the octagon. The biggest MMA stars all battle in the Ultimate Fighting Championship group including UFC Champions Conor McGregor and Georges St-Pierre on the men’s side, along with title-holding hotties Ronda Rousey and Miesha Tate on the women’s side. Full card UFC fantasy drafts and LIVE fight action is available at DraftKings and top recommended sportsbooks.

Sports betting fans, especially those not familiar with the MMA fight game, might be surprised to learn how much Mixed Martial Arts wagering is available on the internet - or how easily accessible it is at various fantasy sports providers. Being as FanDuel avoids MMA fighting altogether, as we pen this on September 28, 2016, DraftKings is far and away the leading supplier of fantasy fighting action. Though not there from the beginning, few were when UFC 1 rocked the McNichols Sports Arena in Denver, CO, on November 12, 1993, DraftKings has certainly brought the MMA some very welcomed attention. Anyone out there remember how a stuck record sounded? Well, sorry for mimicking that but, as is the case with every wagering situation, our number one fantasy MMA draft strategy is taking the time needed to research every fighter on the card. Since we always end up doing a little “extra” research, when we consider selecting Rhonda Rousse on our fantasy squad, it’s strongly suggested that you move the Blond Bomber to the bottom of your homework list.

Keeping the contests relatively simple has been a huge key to MMA fantasy catching on since even casual fight fans can easily understand the squad setups and scoring rules.  Taking UFC 205 as an example, fought at Madison Square Garden in New York and headlined by Eddie Alverez vs Conor McGregor, bettors have 26 fighters to choose from on that Madness in Manhattan fight card. With a $50,000 salary cap, fantasy owners need to secure a stable of five brawlers for the mega card on November 12, 2016. There's a variety of point scoring but the bottom line is winners are awarded 100 PTS if they register a Round One victory. Fighter moves, like significant strikes and knockdowns, are also awarded with anywhere from 0.5 to three points. MMA fighting is the only DraftKings fantasy sport that does not have any negative scoring. Getting a stud or two from the main card, which will be expensive, then figuring out who will win a couple of the lower undercard fights, plus adding one scrappy underdog choice, is solid strategy for any MMA fantasy fighting spectacular.

Arguably, though it’s a losing argument, one of the biggest boosts for Mixed Martial Arts fighting, particularly organizations like the Bellator, King of the Cage and UFC, has been the popularity of MMA online betting. Once any major fight card is announced, the bookmakers at top rated online sportsbook go to work to churn out a ton of popular betting options. While head-to-head match odds are always the most popular prices, prop betting offers, like which round the fight ends and method of victory, are always heavily wagered choices. Although you can’t go wrong by betting on MMA action at any of our recommended sportsbooks, we have a little extra respect for the fight game bookmakers at Bodog. If there's a rumble, in the squared circle or octagon, Bodog is there.

Pioneers of the fight game for decades, across every style and level of competition, Bodog missed UFC 1 by just one year as they were officially founded in 1994. By the time UFC 7 rolled around, Bodog was offering an exciting brand of proprietary action - the Bodog Fight MMA League. It’s a bonus that Bodog still dedicates an entire section of their website to BodogFight as they regularly deliver top-notch and current MMA information. At the time of publishing, Bodog has lines posted for five future UFC Fight Night cards, the UFC 205 spectacular, plus a mix of UFC futures betting options. Wager where online fight betting began by registering a personal account at Bodog, Sign up applications and money transfers, which are both protected by high-level security, are processed anytime 24/7 at this globally respected Canadian sports, poker and entertainment betting legend.