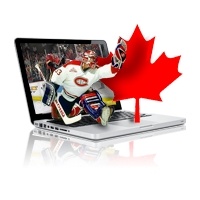 Played on so many levels, wagering on ice hockey rules the roost in the Great White North. Thanks to the NHL, minor pro organizations like the American Hockey League, Junior A Leagues in the USA and Canada, plus a variety of international puck action, hockey is played in (and wagered on) in almost every country on the planet. Add in the spice of fantasy hockey betting and the pot is now even sweeter.

Season long fantasy puck action is very popular in Canada but the action really kicks up a notch or two when fantasy hockey fans sign in to play the daily games. Puck fans can now own a different team of All-Stars everyday thanks to top rated online fantasy sports suppliers.

Fast paced fire on ice action is treated like royalty in Canada and it only makes sense that National Hockey League fantasy sports rule as the King. Whether it’s the hard-hitting style of the Eastern Conference, or the normally high scoring action commonly found in the Western Conference, the NHL reigns supreme in North America from early October through to the Stanley Cup Finals in the middle of June. Add in the fantastic option of fantasy action and the NHL is a complete sports entertainment package.

Though not easy to predict, injuries can ruin a carefully planned full season NHL draft. With new protocols in place, especially when it comes concussions, players can be pulled from a game at anytime. Once diagnosed, concussed players are often ruled out of numerous contests after that in the hard-hitting National Hockey League. Though improvements are still being worked on – the reporting of concussions in the NHL is getting better. Our best advice, as it pertains to injuries, is to just avoid players who have a consistent history of missing time due to concussion or other medical issues. While super-humans, like Sydney Crosby, can be considered as an exception to the rule – buying damaged goods is never a good idea when investing in fantasy hockey drafts.

It’s a new fantasy sports era as popular daily contests are easy to access at numerous sites on the internet. Heading into the 2016-17 hockey season, DraftKings and FanDuel are still the undisputed top daily fantasy hockey portals. Fans of puck action can draft new squads everyday and there is a price point that fits every budget. With costs that range from FREE to hundreds of dollars, bettors can play daily hockey fantasy drafts from early in morning until the puck drop of the late games on the west coast. Stacking your squad with as much firepower as possible is a major key to daily fantasy hockey success. Goaltenders are also a big part of a winning strategy as players need to search out puck-stoppers who are up against lower scoring, offensively challenged, teams.

It’s a given that popularity of fantasy hockey is commanding a bigger slice of NHL bettors bankrolls. However, all that’s needed is a quick look at the betting boards at top ranked online sportsbooks to realize that ice hockey wagering is still hugely popular around the world. From puck lines, to straight up prices and game total odds, plus a wide variety of player props and playoff futures betting options, there are hundreds of odds offered everyday throughout the global hockey season. Variety is the spice of life and, when it comes to puck wagering action, bettors can have it all.

Perform the proper homework, that includes studying the trends, statistics, and injury reports, and then use the hard work to cash in on the exciting fantasy and daily hockey betting action. Don’t forget that top rated online sportsbooks, like SportsInteraction which is highly recommended here at Canada Sports Betting, have been around for decades. They wouldn’t make our list if they weren’t the best of the best in the business. By continuing to offer a simple account registration process, safe and secure bankroll funding options, plus prompt payouts, bettors can wager with confidence at and of the top ranked bookmakers here at CSB.