The UFC makes a return trip to the bright lights of London, England's O2 Arena with several brawls waiting to happen. Local boy Jimi Manuwa will main event against The Ultimate Fighter winner Corey Anderson. Both fighters are the best up-and-comers in the light heavyweight division with a potential title shot awaiting the winner. In the co-main is a welterweight tilt between Iceland's Gunnar Nelson, Conor McGregor's training partner, taking on the always-entertaining Alan Jouban who is in his best form. Get in action as Canada's top sportsbooks give you the best betting lines. 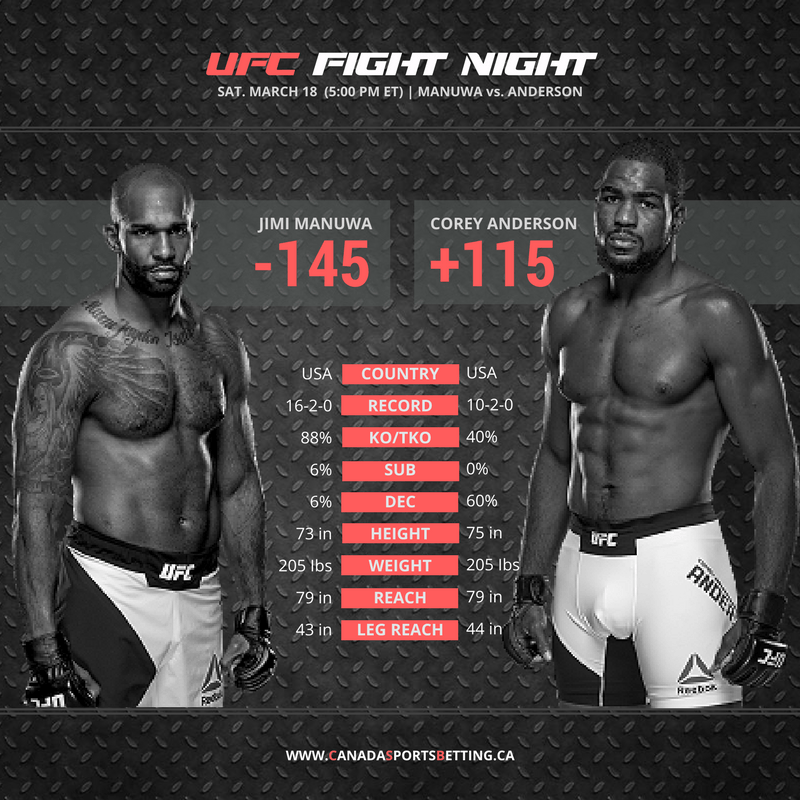 This main event could feature a future champion. Jimi Manuwa (-145) is a slight favourite over Corey Anderson (+115) at SportsInteraction. Bet on him quickly as he could go lower but so long as he stays under 2-1 he is a sneaky bargain. The British slugger has only lost to two men: Anthony "Rumble" Johnson and Alexander Gustafsson.

Either fighter would be world champ if Jon Jones and Daniel Cormier didn't exist. Manuwa is primarily a kickboxer and has a T/KO in 14 of 16 victories. He's more of a measured striker than a brawler. His weakness is his tendency to be trigger-shy. But he holds the power and striking advantage and Anderson has lost to high-level strikers like Shogun Rua and Gian Villante. Corey Anderson will look to take this fight to the ground where he will have a significant advantage.

But the artist formerly known as "Beastin' 25/8" continues to evolve at a rapid rate. If his striking continues to improve, it'll help set up his takedowns better. Manuwa is skilled on the ground though and has gotten up from being taken down repeatedly. He should keep the fight standing long enough to knock out Anderson or win a close decision.

The card has plenty of other fighters lined at great odds. Alan Jouban (+220) is a solid underdog bet. The former model turned fighter is seemingly out-skilled by the cunning Gunnar Nelson but he has both the striking and grappling chops to keep this fight close. Close enough to earn even a controversial decision. Two more fighters worth looking at are Marc Diakese (-260) and Vicente Luque (-130). Diakese is a blue chip prospect being set up against the tough Finn Teemu Packalen. Diakese is the superior striker and has the grappling to deal with Packalen. Luque is undervalued at that price. He is the better all-around fighter than Leon Edwards despite a striking disadvantage. This is his fight to lose barring a bogus decision.