Whenever the UFC returns to Brazil, it's always a crazy party as the Brazilian-heavy card features fights sure to entertain. In the main event is two-division contender Kelvin Gastelum looking to add his most prized scalp yet: "The Phenom" and all-time great Vitor Belfort who is out to prove he can still throw down. Other notables competing are former champion Mauricio "Shogun" Rua and arguably the UFC's deadliest muay thai fighter, Edson Barboza. The action starts Saturday and the top MMA sportsbooks have the betting odds loaded and ready. 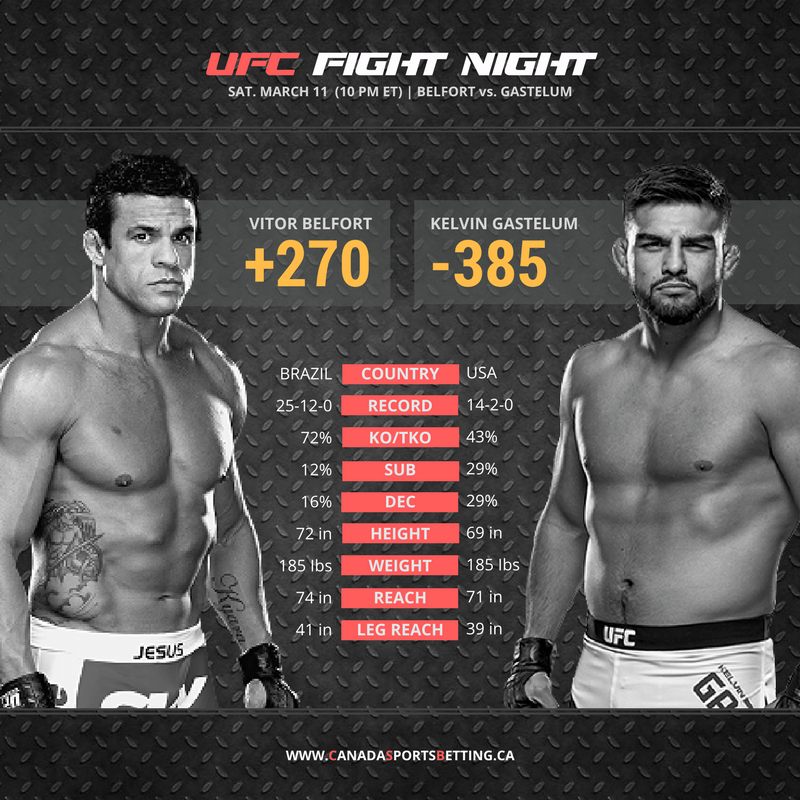 It's the proverbial "passing of the torch" on Saturday when Gastelum (-385) faces Belfort (+270). Gastelum has been on a roll recording impressive victories over Tim Kennedy and former welterweight champion Johny Hendricks. He is 14-2 with his only defeats coming via split decision. Since he debuted in 2013, the only person who has held Gastelum back is himself. His weight-cutting issues forced him to move up to middleweight where he is 2-0. He will be taking on his biggest name opponent, which he should pass with flying colours.

Gastelum has all the goods: athleticism, speed, toughness, and versatility. He has heavy hands, powerful wrestling, and can handle himself from almost anywhere. Belfort is still a threat even at 39. The former light heavyweight champion has explosive knockout power and can sleep even the most durable opponents. But Gastelum can win this fight just by grappling and controlling Belfort till he wears out where the he will either pound him out or choke him out.

At -385 at Sports Interaction, Gastelum is a solid bet. To get better odds, try betting Gastelum to win inside the distance at -275 or take a shot at him to win by submission at +465.

Outside the main event, the card is filled with thrilling matchups that could be barnburners and because some great fighters are at discount. Alongside Belfort is fellow Brazilian legend, Mauricio "Shogun" Rua at -145 taking on boxer Gian Villante. Rua's once-iron chin is gone but he's still the superior fighter against a journeyman who routinely loses to ranked fighters.

Marion Reneau at -135 should get the job done against Bethe Correia. The "Belizian Bruiser" is the better and longer striker although be cautious with biased Brazilian judges. A real value can be found with Jussier Formiga at -125 and trending higher. The Jiu-Jitsu master will take on fellow Jiu-Jitsu ace, Ray Borg. At best, the veteran schools the up-and-comer and at worst it's a 50-50 fight. Wait for a better price then bet Formiga.