Lee Becomes a True Phenom with Win Over Barboza

The "MoTown Phenom" looks to live up to his moniker when he takes on the dangerous Brazilian striker in Atlantic City. Lee (-145) is ranked sixth but has only beaten one opponent in the top-ten, a submission over Michael Chiesa, in a main event slot.

And at only 25, Lee is still just scraping his potential. He still has many questions left to answer but if he beats Barboza, he will further cement his status as a contender.

Barboza (+120) has fought the best the division has to offer and despite his five losses, he's never lost consecutively. Heralded as the division's best striker, Barboza throws kicks at a speed that looks fast forwarded. While it's tougher for him to get a title shot as he's already lost to the champ, beating Lee would reestablish himself as a contender. 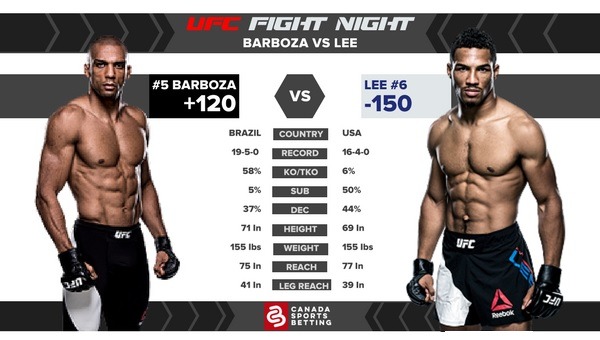 We not only have a traditional striker (Barboza) versus grappler (Lee) fight but an old school MMA fighter versus a new breed. Barboza was a Muay Thai fighter turned MMA fighter and he's rounded his grappling with the likes of Frankie Edgar in New Jersey. He'll be the hometown favourite here. While Lee is part of the younger generation who started out as MMA fighters.

Barboza, like most traditional Muay Thai fighters, will need to keep the fight at range where he'll use his lightning-fast kicks to neutralize Lee. He can use his leg kicks and body kicks to slow Lee down and deter his pressure grappling. Under Mark Henry, Barboza has improved his striking and movement. He'll be a handful for Lee to track down.

Lee is constantly improving. His striking used to be his weakness but as he's shown in his last few fights, it's coming along well. He'll have to assert himself quickly to get Barboza to respect him. Landing 3.45 takedowns at 42.42 per cent per fight is one of the best ratios in the UFC and submitting Chiesa and Francisco Trinaldo shows his grappling is next level.

Prediction: Barboza will find success early on as he gets some nice licks at Lee. But with Lee's improved striking, he'll be able to use it to threaten for takedowns. He'll also be the aggressor and push Barboza back. He'll absorb plenty of damage but once he gets Barboza down, it could be a wrap. Lee weathers Barboza's storm and submits him within four rounds.

All betting odds via Sports Interaction.

Lock it Up! For Dan Hooker (-380) against Jim Miller (+265) as the Kiwi should get past the wily but fading veteran; once a 50-50 fighter, Hooker continues to improve and has the youth, size, and striking edge. While Miller is a tough out, he has not beaten a fighter in their prime in forever.

Who's A Good Dog? David Branch (+165) is being overlooked versus Thiago Santos (-215). Branch is the better MMA fighter and has the grappling and fight IQ to frustrate and even finish Santos. He should avoid the big kick from the Brazilian and use his wrestling to beat him.

Just Say No: to Frankie Edgar (-230) versus Cub Swanson (+170); this is a rematch to a fight that Edgar dominated in five rounds. However, Edgar is coming back so quickly after suffering his first knockout loss. He's a shaky bet and the juice is not enough on Swanson who has lost to every wrestler he's fought.

This action-packed UFC card is flying under the radar but is loaded with ranked talent and significant fights. Canadians can watch on TSN and Fight Network and head to these Canadian-friendly online sportsbooks to get in on the betting action.