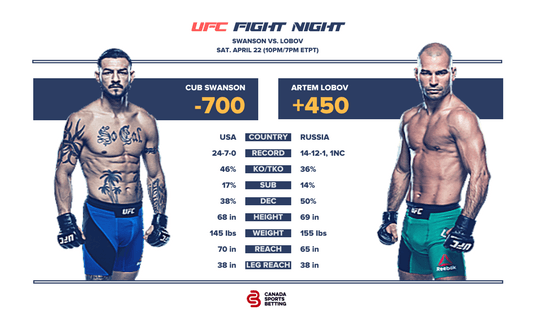 The UFC continues to surprise fans with atypical matchmaking represented right here with this fight. Cub Swanson, ranked #4 in the UFC's official rankings takes on Artem Lobov, a fighter who wouldn't be in the UFC if he weren't Conor McGregor's best friend and training partner. Still, as far as styles go, this is a dangerous fight for Swanson as he hopes to make it four wins in a row and a potential title shot.

Lobov came to the UFC having lost as many fights as he had won though many of those fights came higher than featherweight. He is a "fighter's fighter" looking to finish the fight despite only having a 36% T/KO rate. A southpaw striker, Lobov can give Swanson fits but must deal with his short 65-inch reach and slow-paced style. He utilizes leg kicks effectively but is primarily a counter-puncher with dead-eye precision. If he connects clean, he can hurt and possibly finish Swanson.

Swanson started off alternating wins and losses in the WEC but hit a groove and won six straight in the UFC with victories over other contenders like Dustin Poirier, Charles Oliveira, and Jeremy Stephens. He is primarily an orthodox striker throwing a few but heavy punches and the occasional cartwheel kick. A disciplined yet creative striker, Swanson has the skill, reach (70 inches), and experience advantage over Lobov justifying his steep price tag.

In a fight that may primarily stay on its feet, Swanson will have the advantage. He fights a faster pace, hits harder (higher T/KO rate of 46%), and has longer reach. Both men are tough and haven't been outrightly knocked out and if the fight goes to the ground, Swanson will also have an advantage although this is an area both fighters struggle in.

Before the main event, there are fights worth watching and betting.

Thales Leites (-115) is at pick'em odds with Sam Alvey despite being a better fighter. Leites is coming off a loss and has looked shakey but provided he avoids Alvey's power punches, he can win by being the more active using his striking and grappling.

Two underdogs worth taking a shot at are Matt Schnell (-110) and Joe Lauzon (+160). Schnell is the bigger flyweight and the more talented jiu-jitsu practitioner against power wrestler Hector Sandoval. Lauzon's grappling gives him a clear path to victory against striker Stevie Ray.