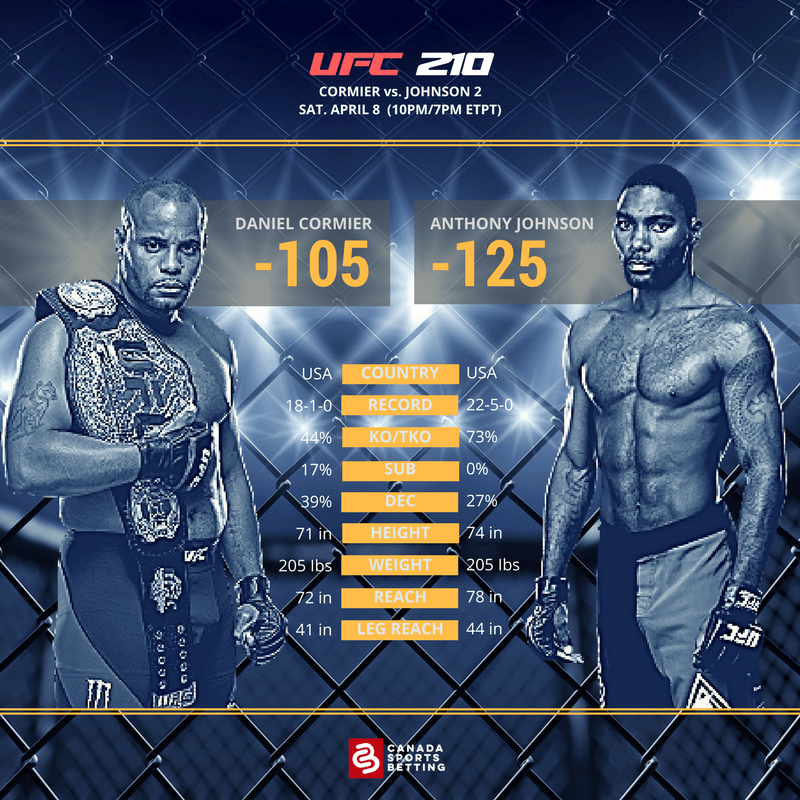 Two years ago, Cormier and Johnson met for the UFC light heavyweight championship. Thanks to former champion, and Cormier's personal nemesis, Jon Jones's off-cage scandals, there was to be a new champion for the first time in four years there was to be a new champion. Cormier survived a powerful barrage, including a knockdown, to submit Rumble in the third round to win the belt.

The betting lines are trending a similar direction as their first fight. Cormier opened as a favourite but got bet up to an underdog. Fans believed Rumble's power would be the difference maker but when it failed him, he broke and submitted. This has been a trend with Johnson since he was still in the welterweight division. Four of his five losses came via submission and five of his last six victories have come by KO. Rumble either knocks his opponent out or runs out of gas and gets submitted.

Thankfully, so long as he has his wrestling he can break Johnson. Rumble will have to one-hit knock Cormier out because anything less and DC will eventually take him down, wear him out, and submit him. Again. DC submits Rumble in the fourth.

Beyond the main event are other underrated matchups that both have entertainment and betting value. Look no further than the co-main event where hometown fave Chris Weidman (-110) is at a pick'em price. Weidman is on a two-fight skid against Gegard Mousasi (-120) who has been on a roll. That won't matter because Weidman will control Mousasi with his wrestling and win a decision. Sean Strickland (+260) is a nifty underdog bet as he has the skillset to make it a close fight with Kamaru Usman (-345).