Montreal Impact Odds To Win To Win The MLS 2017

Let's go back in time. It's 2012 and the Impact have just finished their inaugural season in the MLS - a respectable yet underwhelming 7th place in the MLS Eastern Conference and with plenty of work ahead of them. Just down the road in Toronto, the Reds were winding up their sixth straight season without playoff football. If you had suggested in four years time these sides would be competing for the Eastern Championship, you would have been laughed at, yet that's exactly what happened, and if it weren't for their 401 derby rivals, the Impact would have been heading to the MLS Cup.

This year, the Impact will be looking to build on this result. They will be hurting after making it so far and losing to their bitter rivals and will come out all guns blazing in 2017. 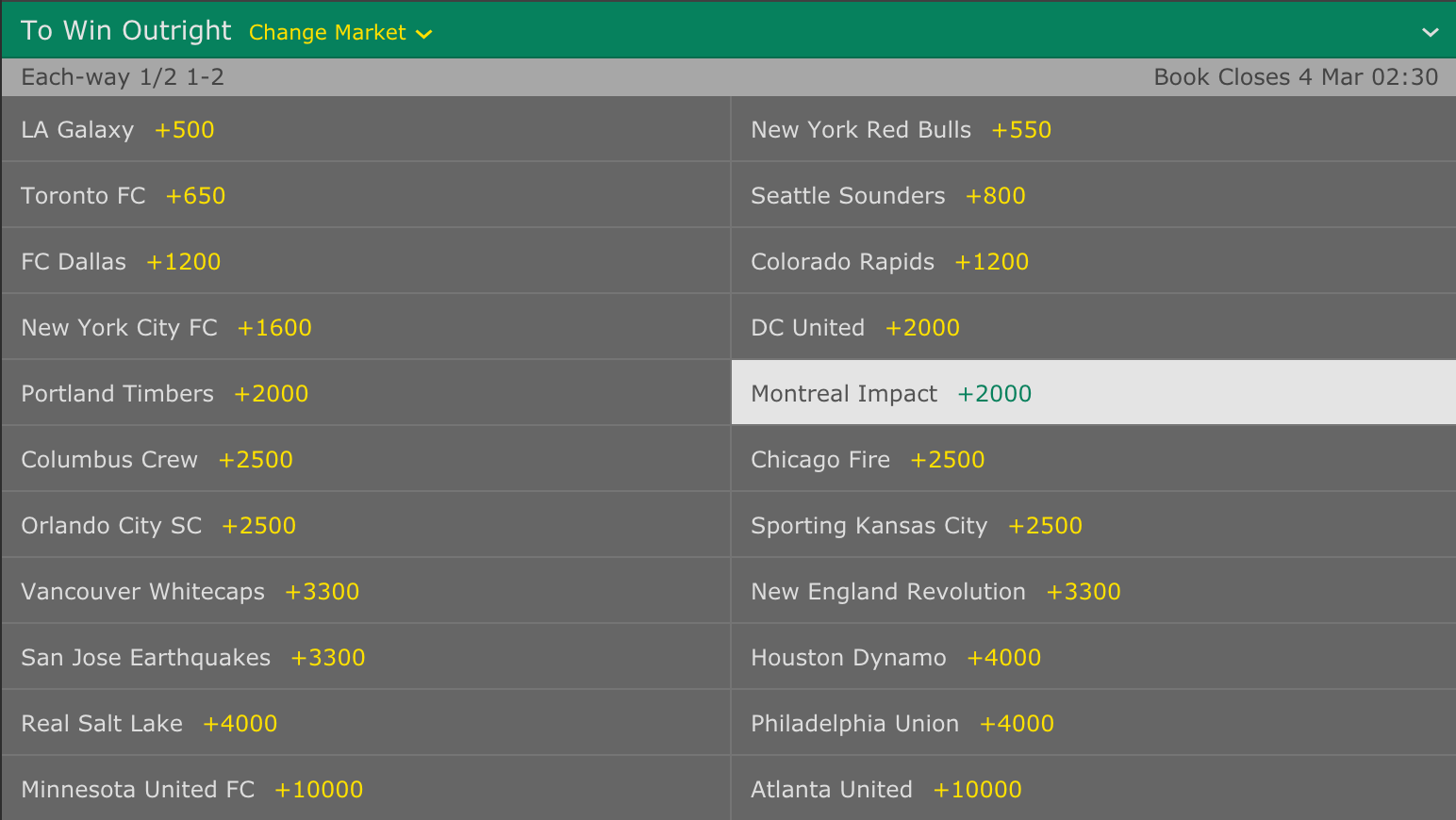 Despite their great performance in last year's playoffs, the Impact start 2017 a fair way down the list of top MLS Cup challengers if you are looking exclusively at odds. The main reason for this is that despite their great form postseason, the Impact barely made it there in the first place, finishing the season with eleven wins and eleven losses consolidated by a negative goal-difference.

There are two ways to look at this. Their odds are such that they are unlikely to drop much further lest they have an abysmal start to the season, so it may be worthwhile jumping on if you believe in their chances to win the competition. Alternatively, you can bide your time - middle of the pack teams tend not to move too much early in the season, so unless the Impact soar early there is little chance of you missing the boat.

As far as Montreal's actual chances of winning the MLS are concerned, well that's another two-sided tale. The Impact have made back-to-back postseasons in the last two years and have improved each time (they made the semi-finals in 2015 and the conference final in 2016). This is the momentum a side needs to win a competition like the MLS Cup, and the side will greatly benefit from the experience of the big matches.

On the other side of the coin is their league form. Montreal have never dominated a fixture-list; their best finish to a regular season came in 2015 where they finished third in their conference and seventh overall. Their goal-difference was just +4 over the course of their 34 matches which really speaks volumes when considering their ability to rise from the pack. You can't win it all without making the playoffs, so whether the Impact can make it to the postseason is something to consider.

***MLS FUTURES TIPS: The Impact have come off a huge 2016 season and will be eagerly awaiting 2017 to continue their momentum. Despite their modest league form, expect Montreal to hit the ground running this year and push one step closer to league dominance. This may be the breakout season the Montreal faithful have been anticipating since the inauguration of the club. Don't miss the opportunity to bet early on the Impact as their price will firm thoughout the season.

How confident are you that the Impact will win this year's MLS Cup? Do you agree or disagree with the above? Whatever your thoughts, be sure to check out our Facebook page where you can discuss all things Montreal in the Major League Soccer game!

Canada is set to start its World Cup Qualifying games next March. Fans want to know: Can Canada qualify for the 2022 World Cup?