This edition of the UEFA Champions League promises to throw up some of the most exciting football we have seen in a long long time. The return of England's best and most decorated clubs like Manchester United, Liverpool and Chelsea, combined with tournament regulars like Real Madrid, Barcelona, Bayern Munich and Juventus will provide some absolutely mouth-watering matchups throughout the season. And naturally, the biggest clubs have the best strikers, who will be competing for individual glory as much as the team goal of winning the tournament.

Last year's edition featured one of the most amazing top goalscorer races in recent memory. After the group stage, Messi was an unbackable favourite to win the race as he had scored ten goals (in only five appearances). CR7 was only on two after a less than impressive Real group performance. But the goals dried up for Barcelona (and Messi) and they were eliminated in the quarter-final stage, paving the way for Ronaldo to chalk up an unlikely come-from-behind victory with 12 goals.

Ronaldo and Messi naturally have a mortgage on the top goalscorer prize for the 2017/18 season, and while they remain in world-best form it is hard to make an argument against either of them winning it for an eleventh consecutive season. The last ten tournaments have featured one or the other as the leading goal-scorer at the end of the campaign. Real Madrid and Barcelona are also always odds-on to make it deep in the competition, which is important as the teams who play the most matches will most often boast the most effective striker(s).

But there are plenty of options to consider for this year's tournament, and it is certainly worth a shot placing your money on one of the other big names. Below you can find all of the top odds provided by Bet365, followed by our analysis of the top contenders.

Eventually Ronaldo and Messi will slow down, but they still show no sign of doing so which is a credit to their work ethic and will define their legacy long after retirement. They will go down as two of the best ever players of the beautiful game and will still have a big say in this market.

It is amazing to see that they appear at +400 and +550 respectively - given that one of them has won the golden boot every season for the last ten years, you could quite easily place a separate wager on both and come out on top. But if you want to pick one of the two, it's got to be Cristiano Ronaldo this year. Real Madrid are once again favourites to win the title, followed by Paris Saint-Germain, while Barcelona are third. Although they still have one of the best teams in the world, Barca will really struggle without Neymar and their performance in the knockout rounds of last year's tournament were nowhere near the level they've shown over the last decade.

For this reason, Barcelona could again find themselves out of the competition prior to the semi-finals, while Real Madrid have managed at least a final-four appearance for the last seven consecutive seasons - an all-time record. Barcelona's inability to go deep in the tournament last season cost Messi a chance to extend his lead in the market, and Ronaldo jumped on the opportunity, scoring twice in the final and notched up a record 100 UCL goals in the process.

Furthermore, Ronaldo has become more and more of a goalscorer in the last few years, and his role in the team has changed to acknowledge that he is Real's best scoring threat. Messi may have been the top scorer in the tournament for the Catalans club in 2016/17, however with Suarez and Neymar also around the goals came from a variety of outlets. You could perhaps argue that the departure of Neymar will mean more of a focus on Messi to score goals, and perhaps that will be case in the group stages where the Argentine is at his most prolific, but only time will tell.

My Team's Next MatchReal Madrid

Neymar's move to PSG is huge, although that doesn't mean he is the most likely to rival the big guns for the goalscoring market. He finished the 2016/17 tournament with eight assists, two more than nearest rival Ronaldo, and he has already shown that he has a great understanding with attacking partner Edinson Cavani. Neymar appears at +1200, although the smart option here would be Cavani at +1400 if you were to choose a PSG player.

The Parisian club is also listed as second-favourite to win the Champions League in 2017/18 and was our pick in the outright market. As stated above, you are obviously more likely to be the top goalscorer in a tournament if your team makes it to the final, so Cavani is a great chance.

The only hesitation here would be that PSG have now also signed Monaco sensation Kylian Mbappe on loan, and the question will be whether all three will be effective together, and if so, will the goals be shared evenly between the trio. Mbappe is a serious talent and scored six in the Champions League last year, so expect him to hit the back of the net on a few occasions, but the top goalscorer is more likely to come from a team with one main outlet.

Bayern Munich are one such team, and Robert Lewandowski is one of the best strikers in the world. The Polish hitman scored eight goals last season and could have gone on to pip Messi like Ronaldo did if his team were able to defeat Real in the knockout stages. His team are also one of the leading contenders to win the tournament, so at a price of +800 he is worth a shot.

Another team that boasts one of the world's top strikers is Manchester United, and Romelu Lukaku will be sure to score a lot of goals in the tournament. United's group is possibly the easiest in the competition, and although manager Jose Mourinho is known more for his shrewd defensive tactics rather than attacking flair, the start of the English Premier League season has proven just how effective the Belgian can be. His link-up play with Paul Pogba, who quite possibly shares the world's biggest bromance with Lukaku, is great to watch, and many are underestimating United's chances of winning the tournament this season, possibly due to the fact that they have underwhelmed in the last few years. For that reason, he appears at +1600 and is really great value given that he is a true contender rather than an outside chance.

Liverpool fans will be over the moon with the performances of Sadio Mane since he has arrived at the club, and while the team probably don't have enough strike power to make it deep in the Champions League this season, they too have an extremely easy group and Sadio Mane is one player that could really tear up the opposition. At +3300 he offers plenty of value. 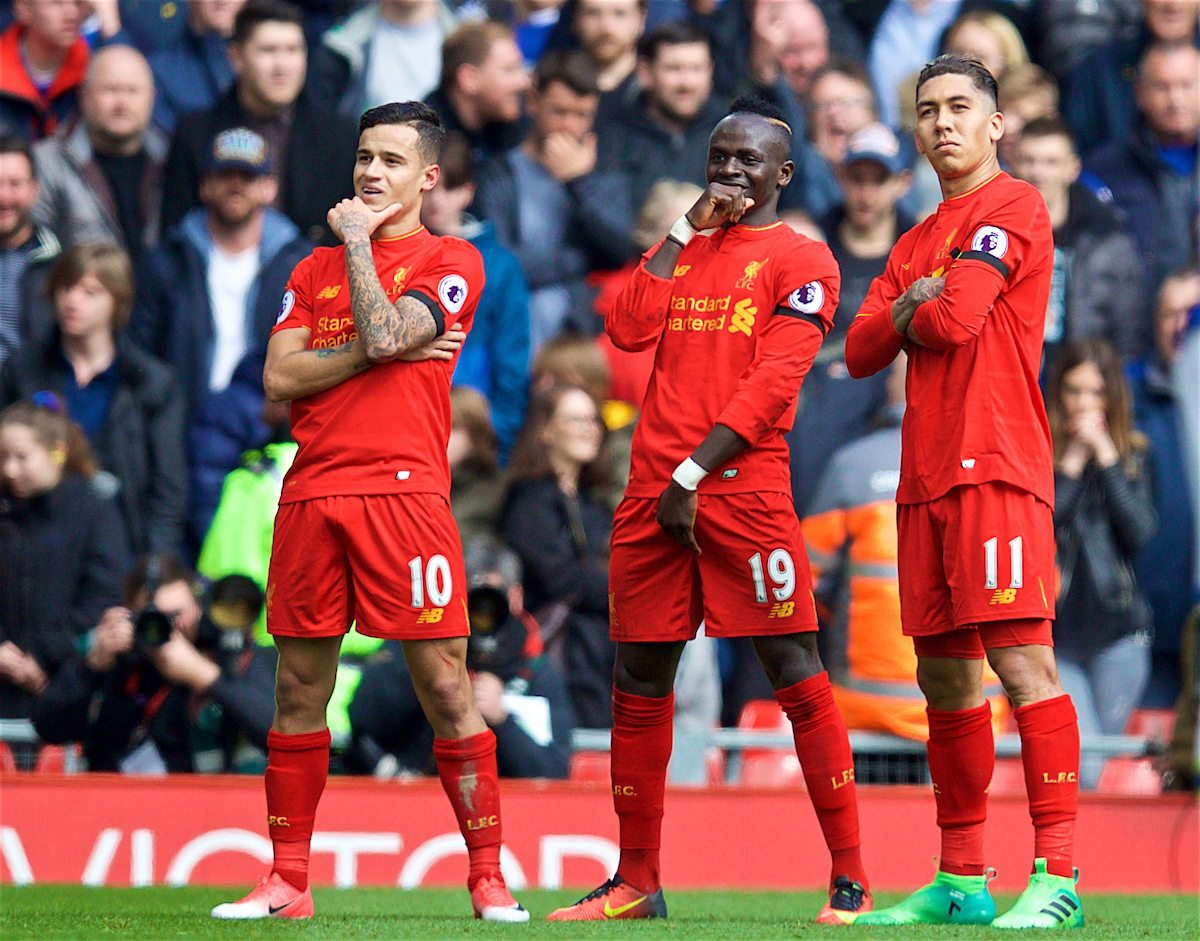 The only issue will be Liverpool's supposed weakness against lower-ranked teams, although this was seemingly blown out of the water in their recent qualifyer against Hoffenheim where they shot out to an early 3-0 lead, on the back of fantastic wing play by Sadio. You could probably throw him in the category below, but someone of his ability could well score a few goals in Europe this season.

Only If You're Brave

In any other team, Luiz Suarez would comfortably be the main strike weapon, best summed up by his record-breaking goal-scoring feats for Liverpool a few seasons ago. But alongside the great Lionel Messi you just cannot see him being the topscorer in the Barcelona team. At +1400, he is way too short, and should be avoided unless Messi goes down injured early in the campaign.

Similarly, Sergio Aguero, while such a great striker and on his day probably one of the best in the world, is far too injury-prone and is not in consideration. Manchester City have a fantastic squad and they too could build on their recent great performances in the Champions League and go one step further this season, but Aguero is too much of a risk for a bet in the top goalscorer market.

While we may have convinced you that there are several options available for the topscorer market this season, you simply can't go past the two best players in the world.

Our outright pick is Ronaldo who is in amazing form and just goes to the next level in European competition. He has also been in great form for Portugal in the World Cup Qualifiers, and as long as he stays injury free should pick up a record seventh Champions League golden boot.

What do you think of our review? Do you agree with our top picks or do you think another player could challenge the Messi/Ronaldo duopoly? Whatever your thoughts, make sure you check out our Facebook page and continue the conversation!

Did you enjoy this article? Share it!
Tweeter
Follow us!
More articles...
Soccer News - 31/03/22
Talking football with … Paul Parker.

Sports betting is now live in Ontario, so what better time to talk about Canada's National soccer team's recent successes! Additionally, the 2021/22 Premier League season is starting to approach its home stretch, and as teams prepare for their final bookings of the year and fight for their spots on the table, we’ve caught up […]

The long wait is finally over for Canadian soccer fans. That's because Canada Soccer is back to World Cup for the first time since 1986. The Canada National Team has been downright sensational in World Cup qualifying and things were finalized for their trip to Qatar on Sunday night. All Canada needed was a draw […]

The European Super League (ESL) was supposed to be the breakaway club for top European football clubs, the likes of Manchester United, Real Madrid, and Liverpool to name a few.

However, plans broke down the very next day after the featured clubs made the announcement, led by Real Madrid’s Florentino Perez. Perez has been defiant in the face of big clubs like Juventus and Manchester City dropping out, with the governing body FIFA also threatening to ban teams from their domestic leagues.

The anger and frustration at the decision to go ahead with a Super League boiled over when fans of Premier League clubs Arsenal, Chelsea, and Tottenham held mass protests outside the relative stadiums. The announcement caused a wave of protest across Europe, as UEFA made it clear that all clubs involved would face repercussions if they were to go ahead and compete in the breakaway Super League.

But, what upset the fans so much and is the Super League really so different from the Champions League?