Champions League Picks: Who's Your Favourite To Win It All in 2017?

Odds To Win The Champions League 2017

Below you will see all of the odds relating to the overall winner of the 2016/17 UEFA Champions League. These lines will fluctuate as the season rolls on so it's best to check back here frequently before placing your final bet. Real Madrid have won the tournament twice in the last three seasons, with Barcelona completing a Spanish trifecta by winning the other final in that period.

The pair of giants will once again be favourites to reach the final, although fellow heavyweights Bayern Munich, Juventus and PSG may have a thing to say about that. And don't write off a tournament when Leicester City is still active! 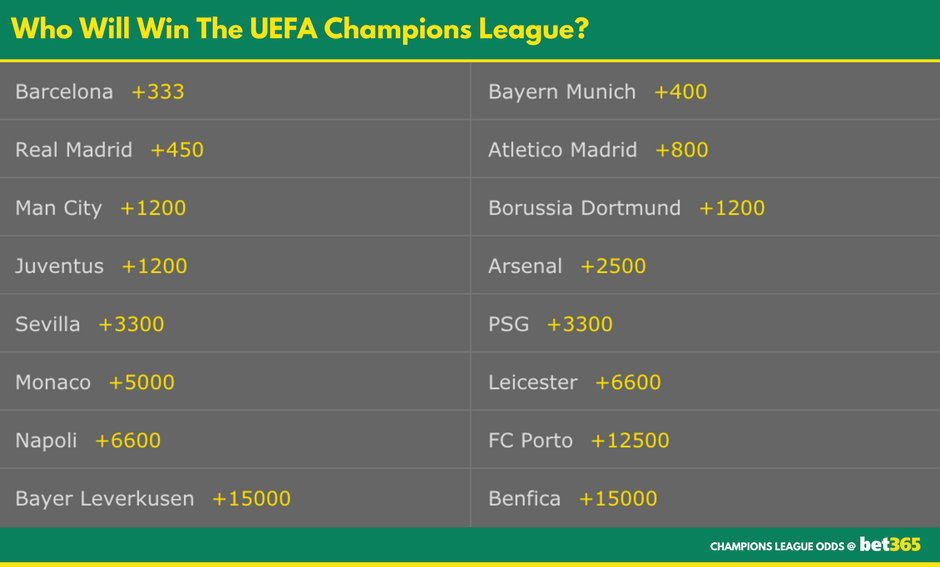 The round of sixteen knockout phase of the Champions League is when the tournament starts to get really serious. While matchups between true European giants are rare throughout the group stage, there is nowhere to hide for the big clubs when they reach this stage - if they want to win the tournament from here they are going to have to prepare to win some incredibly big matchups.

Sevilla are an interesting prospect here - they won the Europa League in the last three seasons and have been rewarded as the first club to gain entry to the Champions League on winning the tournament. They find themselves in the last sixteen and know exactly how to maneuver through a knockout stage. They have arguably one of the easier games in the round of sixteen where they face Leicester, so it is not inconceivable that they should progress deep, but can they step up against the might of the big sides?

Overall, the odds of a Spanish club winning the tournament for the fourth consecutive year couldn't be higher. When you add Sevilla to last year's finalists Atletico and Real Madrid, you already have three candidates and haven't even mentioned the most successful side in the tournament over the last fifteen years - Barcelona. Could this be the year that the other nations step up, or will the fiesta continue? We have our little idea.

Who Will Win Champions League 2017?

When discussing the overall winner of the Champions League, it is tough to leave out Real Madrid and Barcelona. The former is the most successful side in the tournament's history with 11 European Cup/UCL trophies, while the latter is the best team in the modern era. Between them, Real and Barca account for eight of the seventeen Champions League trophies since the turn of the century.

So how do you pick just one of them?

A key stat is that when Barcelona are hot, they are hot. All four of their Champions League trophies this millenium have occurred when they have also won the league. Now I know it is a long season with plenty still to pan out, but Real Madrid appear to have the upper hand in La Liga this season.

If this bit of history continues, Barcelona will not win this year's Champions League and I can't see anyone challenging Real Madrid. The only side that may come close to taking the title away from Madrid this season is Bayern Munich. The German side were the last non-Spanish team to win the tournament and are one of the few clubs with a squad to match los Blancos.

My only concern here is that Bayern aren't regularly tested by top sides in the Bundesliga and may fail to hit the necessary heights on the big stage. Only time will tell!

Bet365 offer a wide selection of betting lines on all UEFA Champions League fixtures. Remember that all fixtures from the round of sixteen until the semi-finals are two-legged ties - you can bet on individual match lines or pick the team you think will progress over the two matches.

Goal-scoring markets are always popular. Take a punt on who you think will be the first or last player to hit the back of the net, or take the safer option and select a player who you think may score at any time. Another good option is the 'both teams to score' market where Bet365 typically offers close to even odds.

Don't forget that you can always bet live on fixtures, so be sure to place a wager in-game to receive enticing odds on your team, especially if they go a goal down early!

The round of sixteen fixture list has provided punters with plenty to think about - there is undoubtedly the potential to score with an in-game bet.

One of the biggest matchups is Bayern Munich vs Arsenal, who meet in the Champions League for the fourth time in the last five years. In total, the two sides have played in three knockout ties and Bayern have progressed on all three occasions. This will be the first time that Arsenal will come into the tie as group winners, meaning the first match will be played in Munich.

Watch this one carefully - Bayern should progress but there will be times where Arsenal may be ahead in the tie so make sure you're ready to bet live.

The other notable tie is Sevilla vs Leicester City. The foxes have been abysmal in the English Premier League this season and are battling relegation, yet their Champions League form has been inspiring. They come up against a Sevilla side with a wealth of European experience and who are certain to be too strong over the two matches, although Leicester are a special case. Are you brave enough to place an in-game bet on this one?

Did you enjoy this article? Share it!
Tweeter
Follow us!
More articles...
Soccer News - 03/05/21
The Collapsing European Super League: Is There Still Hope?

The European Super League (ESL) was supposed to be the breakaway club for top European football clubs, the likes of Manchester United, Real Madrid, and Liverpool to name a few.

However, plans broke down the very next day after the featured clubs made the announcement, led by Real Madrid’s Florentino Perez. Perez has been defiant in the face of big clubs like Juventus and Manchester City dropping out, with the governing body FIFA also threatening to ban teams from their domestic leagues.

The anger and frustration at the decision to go ahead with a Super League boiled over when fans of Premier League clubs Arsenal, Chelsea, and Tottenham held mass protests outside the relative stadiums. The announcement caused a wave of protest across Europe, as UEFA made it clear that all clubs involved would face repercussions if they were to go ahead and compete in the breakaway Super League.

But, what upset the fans so much and is the Super League really so different from the Champions League?