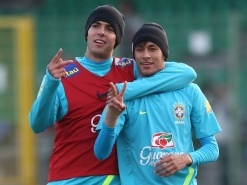 As the most watched sport on the planet, soccer players are also the most popular. These stars are renowned not only for their abilities but also for their personal lives, fashion wear, endorsements and off-game activities. They are celebrities in their own right. Since the explosion of social media, fans everywhere now flood soccer stars’ accounts hungry to learn more about their heroes. Twitter is in the top-three of fans’ choice and these ten soccer stars’ accounts are the most followed.

Soccer Has All The Betting Action

Among those who fell just short on twitter are Spanish midfielder Xabi Alonso currently with German club Bayern Munich with 10.6 million followers; Manchester City’s Argentinian superstar Sergio Aguero clocks in with 10.5 million followers; and Welsh striker and teammate to Ronaldo, Gareth Bale is closing in on 10 million followers with 9.9. The sport’s popularity remains feverish and social media only makes it easier to keep growing the sport making it ripe for shrewd fans everywhere.

These fans can utilize their passion and knowledge for the game by profiting off of some bets. Our bookmakers offer the best prices for all kinds of soccer action: FIFA World Cup, Premiere League and UEFA Champions League. Best thing about soccer is it’s a year-long sport with all the many competitions and tournaments so there are no “off seasons” for betting. Avail of the sign-up bonus as you take your fandom to the next level.