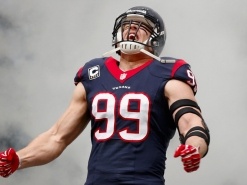 It’s Halloween time and dressing up as NFL players is fairly common in the football-crazed North America. There are certain players who don’t just make good costumes but are real terrors themselves. They strike fear in opposing teams and some are even so intimidating their own teammates cower at their mere company. Whether it’s with their superior skills, physically-imposing presence, cruel tactics or a combination of all three, these players are not to be be messed with.

The Most Intimidating Football Players

Honourable Mentions: while terrifying in their own right, many of these players just missed the top ten. The Miami Dolphins’ Cameron Wake joins teammate Suh to give the team two of the scariest defenders that leave quarterbacks with nightmares. Cowboys’ receiver Dez Bryant’s intensity leaves both friends and foes shivering at times. The Seahawks’ Kam Chancellor spreads fear with his bone-crunching hits. And last but not least, Eric Weddle is one of the game’s best safeties and also one of the most fearsome partly due to the manliest beard he has.

With Halloween fast approaching, it can only mean the NFL is almost halfway through the season. A clearer picture may be forming in terms of who the real contenders are as the wins and losses start to accumulate. Like Halloween is the most popular festival, the NFL is the most watched league. And plenty of these fans also flock to the betting lines to get in on the action. Our trusted bookmakers provide the best NFL betting odds on top of a variety of betting choices and updated game info. The signup bonuses also help new players settle in nicely.