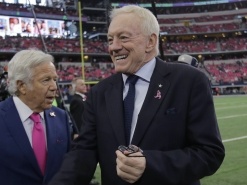 With multi-year, multi-billion, television deals becoming the norm for professional sports leagues across North America, salaries are rising to astronomical levels. Whether it's the NHL, MLB, NBA, or the behometh NFL, everyone involved in these organizations are pulling in huge sums of money. However, while the huge, and often record-breaking salaries of players and coaches make most of the headlines, it's the owners of these teams that are the ones really laughing all the way to the bank. This list looks at 10 of the richest sports teams owners in North America today.

The sheer amount of money that some of these owners are worth in 2016 is absurd. And while most of them bought there teams in the 1990's and early 2000's, the fact that Steve Ballmer paid $2 Billion for the Clippers and still comes in as the head and shoulders leader on this list is astonishing. Owning a sports team isn't a possibility for 99% of the world, but with these valuations of team continuing to climb, even about 99% of that 1% of people that are worth nine and ten figures today aren't going to be able to get a piece of this pie for quite a long time.

Sports bettors who follow the four major North American pro leagues (NFL, NBA, MLB, NHL) definitely recognize the 10 figureheads on this list, but they have zero impact on daily handicapping of games. However, the best thing for sports bettors to come out of these rising salaries and incomes for owners through various t.v. and media deals is the wide variety of options to consume games. From things like NFL game pass, which allows bettors to watch every NFL game each week (and replay games afterwards to make notes), to NHL Gamepass and similar sport specific packages for the other leagues, sports bettors aren't limited to viewing whatever game is on nationally.

This means that bettors can obtain so much more information first hand - via the "eye test" or digging through advanced stats and analytics - to help increase their win rate and ultimately their bankrolls.