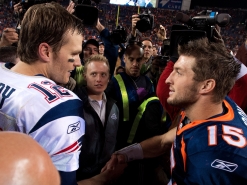 The NFL continues to be America’s most popular league and with the wonders of social media, fans can interact with the players to a closer degree. NFL players only play no more than 20-plus games a season but the drama is ever-present as injuries, off-field antics and intense games bring out both the best and worst in players. While some remain popular to fans, some transcend the sport and become a major celebrity in their own right…

NFL Is Where The Money Is At

Brady and the Patriots continue to remain America’s darlings but they still have their work cut out for them as other elite teams continue to impress. The Denver Broncos don’t have a popular superstar with the departure of future Hall of Fame quarterback Peyton Manning but Von Miller and the defense remain the best in the league. Newton, Wilson and the rest of the NFC stars continue to grow their brand. The Panthers were one win away from becoming Superbowl champions while the Seahawks endured a trying season but will look to return to their championship glory.

The NFL has only a handful of Superbowl-capable teams like the aforementioned teams but each season is a new season and more unheralded teams enter the picture as a true threat. As the most-viewed league in America, the NFL’s betting lines are one of the most scrutinized but that is where the money is. As a dedicated and passionate fan, reward yourself by testing your NFL knowledge against other fans with our nifty bookmakers who offer the best betting prices with many betting options. Also avail of the signup bonuses they are.