Top 10 Most Heated Rivalries In MLB 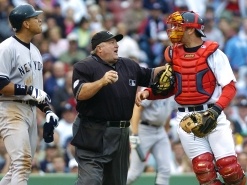 Out of the big four major league sports, baseball has the least amount of contact but the most amount of brawls. Perhaps it’s playing their division rivals where winning made such a huge difference in the season or perhaps it’s the incredibly tight bonds they foster amongst each other or perhaps it’s playing under the burning sun for a long time. No one knows why MLB baseball players get so heated but when they do, fists fly instead of balls. Here are baseball’s ten most heated rivalries today.

Honourable Mentions: with the MLB’s deep history there have been countless rivalries that formed throughout. A more recent one pits the Toronto Blue Jays against the Texas Rangers thanks to the dramatic 2015 ALDS they had, which saw the Jays come back from a 2-0 series deficit. The Mets-Phillies rivalry has also been heated especially in the mid to late 2000s with both teams vying for divisional supremacy. And the rivalry between the Yankees and Royals between the late 1970s and 1980s was considered the greatest postseason rivalry of its time.

With the MLB heading to the playoffs, rivalries will be renewed or discovered as all teams switch to higher gear. Catch all the action and get a side of it all by checking out our nifty bookmakers, which provide the most up-to-date betting odds and game updates. Signing up gifts you free cash and the customer service makes the whole ordeal fast and painless.