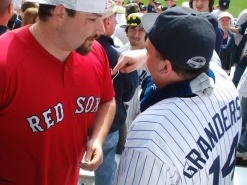 Rivlaries in baseball are one of the best parts of the game, and it's the fans that play a big part in that. Whether it's the simple hatred of a rival, or a player playing for the opponent, there are many times when fanbases get too heated about the way the game is going or how their team is playing. This list counts down the 10 best MLB fanbases at pushing the limits of rivalries over the edge.

If you've followed baseball for some time now, none of the teams and their fans on this list should come as a big surprise. We've seen plenty of negative incidents in recent memory involving these groups of MLB fans as they've got a tough time not taking things over the limit. It was just a few years ago that a Dodgers fan was beaten within an inch of his life in San Francisco and stories like that cast a negative light on these groups of fans that take it too far. Obviously not all fans of the 10 teams on this list are looking to trade blows when things go wrong, but as a whole, it's these fanbases scattered across the league that the rest of MLB loves to hate.

Baseball bettors know that home field advantage always plays a part in the number the oddsmakers put out on a given game, and generally speaking that home field advantage is a little bigger when it involves these 10 teams. The fact that these fans are considered the most "heated" in MLB plays a role in that as they make their fields a tough place for visitors to play and visiting fans to attend.