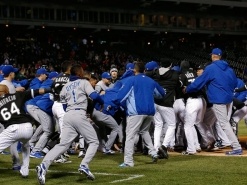 The baseball season is long and grueling. Playing 162 games in 183 days can take its toll on any player. Many players deal with it well – but sometimes a certain string of events just causes a player to lose it and going absolutely nuts. From fighting fans in the stands to taking their anger out on inanimate objects here are the top 10 Major League Baseball players going nut.

Betting on baseball can be done all year round, even if the season starts in April and wraps up around Halloween. Usually as soon as the World Series finishes, future bets are available for who will win next year. A smart bettor may want to wait until the free agency period gets rolling because betting any futures, if the odds are attractive enough it can be worth one’s while to bet early and often.

The World Series is currently in full swing, but 28 other times are looking forward to next season. They have begun to negotiate contracts with pending free agents and look at ways to improve their team. The looming offseason is thin on free agent talent. At the top two free agents - Jose Bautista and Edwin Encarnacion – both played in 2016 for the Toronto Blue Jays. Seven months later Edwin still sits at the top, but Jose Bautista has fallen down the list. Joining Edwin at the top of the list are outfielders Yoenis Cespedes of the New York Mets and Josh Reddick of the Oakland A’s and closers Aroldis Chapman of the Chicago Cubs and Kenley Jansen of the Los Angeles Dodgers. Some of these players may return to their respective clubs, while other may go on to sign big deals with new teams. Whether they stay or go will influence 2017 World Series odds.