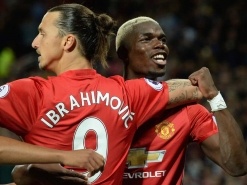 As the world’s most watched soccer league (potential 4.7 billion TV audience), nobody balls out quite like the stars of the Premiere League. Two teams in particular, Manchester United and Manchester City have been going through an arms race signing the world’s hottest players although Chelsea and Arsenal have deep pockets to fill as well. This list compiles the ten highest-paid players of the league based on a weekly salary as compiled originally by the UK’s Daily Mail.

The Premiere League is into the midseason as teams continue to jockey for the top spot. Manchester City leads the pack with an unbeaten record and a whopping goal differential as Tottenham, Arsenal, Liverpool and Everton all trail by a few games. But as Leicester City proved last year, massive upsets and underdog stories still happen in the Premiereship. Never mind that two or three teams have all the payroll to buy out the world’s best players, at the end of the day it’s still the teams who play the bet who reap the rewards.

Speaking of rewards, check out our verified bookmakers and take part in the excitement of the Premiere League. The sites offer the best and most updated betting prices with a variety of betting options and live betting. They also update you on recent happenings in the league as well as providing generous sign-up bonuses.