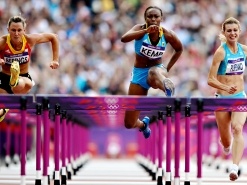 Cynicism created by the controversies at various Summer Olympics are overshadowed by incredible athletic achievements witnessed by the world. Each time the Olympiad arrives, women and men push the boundaries of what’s possible in terms of the strength, endurance and agility of human physiology. Adding to these amazing accomplishments, the Olympics have also been an event where human rights advancements are showcased... [+]

When the ancient Greeks started the Olympic tradition, athletes competed mostly in the nude, with the main pieces of equipment being a chariot, discus, javelin or a strap to protect hands during boxing contests. Fast forward a couple of a millennium to the modern games, which feature high-tech fabrics that increase aerodynamics and training regimes that make the most out of kinesiology and nutrition science. Put simply, the skills and physical talents of athletes have never been so maximized, resulting in accomplishments previously thought impossible, such as a mile run in 3:43.13 and a 100-meter sprint that takes less than 9.6 seconds.

When betting on the Summer Olympics, there are always a few sure-fire favourites, such as Usain Bolt, who has never lost an Olympic race. However, there are massive upsets always waiting to happen, such as the U.S. Men’s basketball team in 2004, which lost to Argentina in the semifinals to fall to the bronze medal position, despite players such as LeBron, Wade, Duncan and Iverson taking part in the tournament. For the 2016 Rio Olympics, the first held in South America, there’s a good chance that smart wagering fans will be able to find at least one big upset, leading to a huge potential payday.