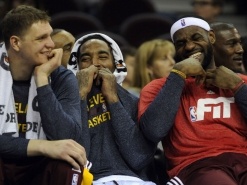 Whether it’s April Fools’ or not, pranks have been a recurring theme in the NBA and thanks to the wonders of social media they’ve become even more popular. A lot of the pranks have become quite redundant and have lost their significance but depending on the variation and the victim’s reaction, they can still become classics. We compiled a list of the funniest pranks pulled off by NBA players ranking them by creativity, effort put in by the pranksters and the reaction of the victims:

There will be plenty more pranks and offbeat moments in the upcoming NBA season. Kevin Durant jumped ship to the Golden State Warriors joining the ranks of back-to-back MVP Steph Curry and Klay Thompson. It’s possible Durant gets a taste of a Warriors prank at some point. LeBron James and his Cleveland Cavaliers look to defend their title as the rest of the East make big offseason acquisitions to try and unseat them. An interesting draft led by first overall pick Ben Simmons will get their own rookie hazing pranks as they look to help their teams build a better future.

Jokes aside, the NBA is filled with thrilling back-and-forth action where off court news and drama help shape a vivid narrative making it one of the most watched sport around the world. You can take a step further by betting on your favorite teams with our recommended Canadian bookmakers, which offer the best prices on the teams on top of a signup bonus.