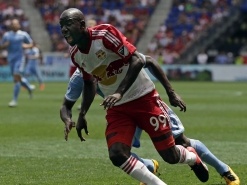 Coaches in every sport play a big role in developing skills to enable players to succeed. Yet, there's always that one skill that coaches can't really teach: speed. Whether it's the old saying that "you can't teach speed," or that "speed kills," having lightning quick players on your roster changes the dynamic of that team and continually puts pressure on their opponents.

No more so is that true in in a game like soccer and the MLS is loaded with fast, speedy players throughout the league. This list takes a look at some of the fastest the MLS game has to offer.

No matter what position a MLS team has there fastest player, the impact that speed can have on a match can be enormous. Whether it's running back to close down an attack as a defender like Boyd Okwuonu would, or breaking away on a rush like many of the strikers in the list do, all of these 10 players in the list can have a great impact each time out there because of their speed. These are the types of players every team needs to have at least one of if they are looking to be successful and it will be interesting to see down the road whether more speedsters from other soccer leagues make the jump to MLS.

Handicapping MLS games is tough, but taking an approach to knowing about these speedsters and the impact they can have on winning and losing is important to consider when making a wager. Many of the guys listed here show their speed and skills on offense, and that should help a bit when deciding totals wagers because of their ability to score in a hurry. Yet, just because these guys are fast, doesn't mean a bettor should base the bulk of their methods on knowing who these players are up against because they are still just one or two guys on a team and they'll still need to get space and the ball to use their skills efficiently.