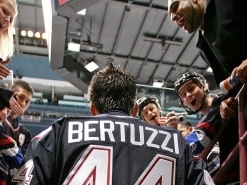 Everyone has their ups and downs and even the best and brightest NHL stars go through some gut-wrenching moments thanks to either bad decision making or just plain bad luck. We compiled a list of some of the worst tragedies to befall NHL stars. By “stars” we don’t necessarily mean Hall of Famers but simply popular NHL players who made significant impacts on the league. The rankings were determined by the cause and effect of the calamity tied with the player:

These former NHL stars continue on with life outside hockey but current NHL stars like Sidney Crosby and Alexander Ovechkin return with the new NHL season. Crosby won his second Stanley Cup with the Pittsburgh Penguins and looks to defend the title, a feat not done since the 2001-2002 season. Ovechkin is still on the hunt for his first Stanley Cup and his Washington Capitals remain one of the best teams in the league. Meanwhile, the Chicago Blackhawks and other contenders re-tool to welcome the new season.

God forbid any misfortunes take place with the current batch of NHL stars although Hart Trophy winner Patrick Kane is no stranger to scandals. His Blackhawks are geared to make another run for the Stanley Cup and you can take part of all the action with our bookmakers, which offer the best prices for betting. Take advantage of the signup bonuses now and register as the NHL season gets underway.