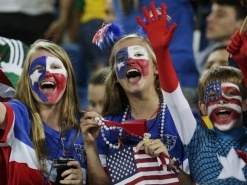 Prior to the 1994 FIFA World Cup, the United States was pretty much a soccer backwater with a few cities enjoying bit of competition through the NASL and other minor pro leagues. In the wake of the World Cup, which smashed attendance records, Major League Soccer was launched, eventually becoming one of the fastest growing pro leagues in the world. Since then, these ten cities in the United States have become the best locales for American soccer fanatics.

Betting On The Best Soccer Cities In The U.S.

The rise of the MLS has doubtlessly created a fanbase within the United States that will fuel the long term stability of the sport within the country. In addition to exciting club soccer featuring international stars, Americans now enjoy a pair of national soccer teams that consistently make waves during FIFA competitions.

The popularity of American soccer corresponds to a rise in wagering, with fans placing bets on their favourite teams. Considering that moneyline odds are calculated according to the size of betting pools, you’ll sometimes find good value when betting against teams with huge, overconfident followings.

“Homerism” is a sports betting phenomenon in which fans are unable to separate their feelings from reality when wagering for their home team. On a large scale, this can shift odds in slightly in your favour, as teams with smaller fan bases generally produce smaller betting pools.