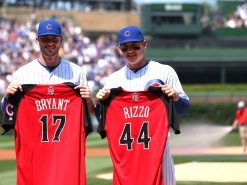 Few things top heading out to the ballpark in the middle of the summer, with a couple of friends and grabbing a few beers and a hot dog. Of course, many fans want to represent their favourite teams and players when heading out to the game – wrapping themselves in their team’s colours and donning a jersey of their favourite players. Here are the top-10 best-selling MLB jerseys in 2016.

Biggest Stars In The MLB

Star players influence baseball betting lines and odds for games every time they do or do not play. In baseball, the biggest line and spread movements occur with star pitchers. When the Los Angeles Dodgers spend out Clayton Kershaw to pitcher, they will rarely be the underdog – even when on the road. Star players do not just affect game odds, but future odds. In the offseason when deep-pocketed teams such as the Boston Red Sox spend large sums of money on the biggest free agents, they see a large uptick in their World Series betting futures.

It is always important to remember, teams stacked with stars do not always win. In 2014 and 2015, the Kansas City Royals went to the World Series – winning it in 2015. The Royals have one of the smallest payrolls in the league and have a roster relatively devoid of stars. The Royals faced the San Francisco Giants and New York Mets in the World Series – two teams with a player in the top-10 for jersey sales. The 2016 Cleveland Indians are a similar team to the Royals – as their team is full around youth and depth, not star power. They are nearly the polar opposite of the Chicago Cubs – who have three players in the list.