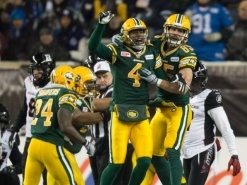 Over 14 weeks in and the CFL is winding down to the Grey Cup playoffs. The Calgary Stampeders have been near flawless in asserting a one-team show while the rest of the West catches up and the East flounders. Mike Reilly and the Eskimos are still thick in the playoff race but Bo Levi Mitchell has stolen the show as the man in the middle. Joining Mitchell are other big-time performers as we count down the season’s ten best players as of week 14.

CFL Football: Where Anything Can Happen

Honourable Mentions: narrowing down the CFL’s best to ten was a tall task and some players were just left out but not forgotten. The Stampeders’ running back Jerome Messam currently leads the league in rushing yards and is on pace to break his career-high. The Redblacks’ Chris Williams leads all receivers in touchdowns and ranks fourth in receiving yards. And the Alouettes may be having an atrocious season but defenseman Bear Woods still leads the league defensive stops.

The CFL’s motto is “no lead is safe” because in the offense-friendly league, scoring happens at a faster rate. Betting on the CFL it’s worth noting its differences from the NFL and even though it isn’t as popular it is a trendy sport in Canada. Canadian fans passionately support their teams and you bet on them with our most trusted betting sites, which offer the best prices and plenty of betting options on top of generous sign-up bonuses.