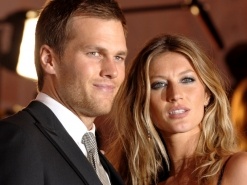 They were born worlds apart but were both worldbeaters who found their way to each other. Gisele Bundchen hails from Brazil and conquered the modeling world earning herself the spot as the world's top model while her husband Tom Brady became the most successful quarterback of his era and perhaps of all time. What started out as a blind date became much more and now the two enjoy their status as one of the most influential couples on the planet.

World's Top Model and Her GOAT

Brady to win the Super Bowl MVP is +140 at Bodog and as high as +160 on other select betting sites and is the favourite among all the players to do so. It’s a fair assessment as Brady is gunning for his NFL-record fourth Super Bowl MVP on top of another record, a fifth Super Bowl ring. For Brady to pull this off, he’ll have to outplay the man opposite him, Matt Ryan who has been on fire and looks determined to make the Falcons the team of destiny this season. Brady holds the experience advantage and is the NFL’s all-time greatest playoff performer. But the Pats are no strangers to losing in Super Bowls so the pressure is always on Brady and his boys to deliver.

Three of the four Patriots Super Bowl victories have rewarded Brady as the MVP and the one time he didn’t win, his top receiver, Deion Branch took home the honours. Brady is going to be the motor that drives the engine. A staggering 27 of the 51 Super Bowl MVP’s have been quarterbacks or close to 53% of the time. If the Pats are to win, it’s more than a 50% chance Brady wins the MVP and +140 is a decent price to bank.

What’cha gonna do brother, when Chris Hogan runs wild on you?! His name may not bring out the same fanfare as WWE’s Hulk Hogan but he’s been Brady’s favourite target in the last few games. Hogan dropped a hat trick against the Steelers and should he find the same chemistry with Brady, he’s a good alternative bet to win the MVP at +2500. He’s also a solid +600 bet to score the Pats’ first touchdown or double that at +1200 to score the first touchdown.

The Pats are 3-point favourites to beat the Falcons and it could be a shootout of epic proportions. They are one of two teams (Steelers) Matt Ryan has not yet defeated in his NFL career. Brady and Bellichick have been here consistently and have beaten other seemingly unstoppable teams. Should it be a close game in the fourth, leave it to Brady to outdo the young Matt Ryan and further cement his GOAT status with his NFL-record fourth Super Bowl MVP.