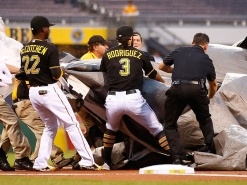 It gives MLB bettors a bit of a different perspective on their respective careers and just how hard it is to succeed on a daily basis in the majors.

How To Use Stats At Baseball Betting

There is no doubt that none of the former MLB players on this list want to be remembered for all their "negative" plays in establishing these records. But the reality is that baseball is a very tough game to succeed at for a long period of time at the highest levels and nearly all of these players had their career numbers in these statis categories take a hit because of how long their careers were.

Chances are we see Cal Ripken and Reggie Jackson vacate this list in the near future, but as the competitive professionals they all were, being atop these statistical categories like they are has to sting at some level. When a .300 hitter is considered very good in MLB - which they are - the flip side of that is that those same hitters are failing 7 out of 10 times at the plate.

It's simply the nature of the game, and when you play for 20+ years like many of these players did, all of those "failures" add up in a hurry.

From a baseball betting perspective, these players may not be on the field anymore, but the statistical records they do hold on this list have to be analyzed every year for the current MLB players. Bettors that play a lot of totals will tell you that teams that have multiple players with high strikeout rates are typically great 'under' teams and you don't want to get caught with 'over' tickets too often with them. Consistently losing teams like the Pirates were in the 1990's and 2000's are rarely a good bet, and guys who hit into a lot of double plays kill rallies in a hurry.

These stats will always be relevant to baseball and the success a MLB bettor will have during a given year or betting career, and you do yourself a disservice when not digging into all the advanced analytics involved in today's game.