The Top 10 Hitting Pitchers Of All Time 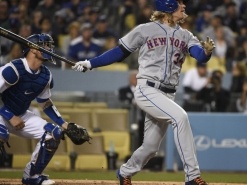 Since the American League adopted the designated hitter in the 1960s, pitchers only hit in National League ballparks and the majority of them do not instill fear into their opponents. As always, there are exceptions to the rule and some pitchers have enough power and plate vision to crank it out of the park. Let's dive into baseball history and sifting through decades of statistics...

Ten Pitchers Who Could Hit

Hitting pitchers are a small part of modern baseball. Half the league does not let pitchers hit, the other half uses pitchers sparingly. Their main jobs are to advance the runner with a sacrifice bunt or to draw walks. The odd player is capable of hitting, but the majority of pitchers in the National League struggle to hit .200. There is talk of the National League adopting the designated hitter, which would essentially spell the end of hitting pitchers.

When betting on baseball, pitcher matchups have one of, if not the biggest impact on money lines. When Clayton Kershaw is pitching for the Los Angeles Dodgers, the line will reflect it. Some of the best pitchers struggle against certain teams and players, so it would be recommended to spend a bit of time looking at a pitcher splits before wagering any significant money.