The Hottest Wag Of the Week : Elaine Alden 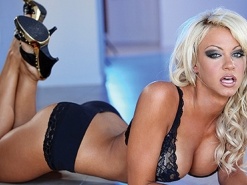 Landry Fields had a promising NBA career as a gritty forward but several injuries forced him to retire abruptly. Fortunately, the former New York Knick and Toronto Raptor landed a sweet gig as a talent scout for the San Antonio Spurs and is married to arguably the sexiest model in the league, Elaine Alden. The blonde bombshell is a model, mom and diehard basketball fan and will be fully supporting Fields in any role he takes. Her photos light up the Internet but here’s a taste of what she’s all about.

Hotter Than Any Team In Basketball

As the leaves turn orange and fall, the temperatures drop and Halloween approaches, it’s the NBA season coming back. Alden will be balancing life as a model and mommy as hubby Landry Fields will be adjusting to his new role as a college scout for the San Antonio Spurs. The five-time NBA champions will look to make it six when they also adjust to life without longtime franchise big man Tim Duncan who retired last season. They will have their hands full as the Golden State Warriors just snagged former MVP Kevin Durant and are looking like the clear-cut favourites to win it all.

Next to only soccer, basketball has to be the most popular team sport in terms of its visibility across several continents. Whether it’s in Asia, Australia or Latin America, the sport has plenty of fans but all the money is right here in North America where gamblers flock to the betting lines to be part of the action. Our trusted bookmakers offer the best betting prices on top of up-to-the-minute updates on all current game action. Signup bonuses up to $200 let first-time players settle in quickly.