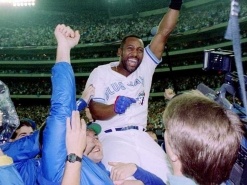 Since becoming an expansion team in 1977, the Toronto Blue Jays have had many successful years in MLB. Blue Jays fans would prefer to have seen more, but when success and ultimately World Series championships have only come twice to an organization in their near 40 years of existence, the players involved in those years will always be remembered in Blue Jays lore.

This list counts down the 10 best Blue Jays players the organization has ever had, whether they were part of the glory years in the early 1990's or not.

There is no denying the fact that all 10 of the players on this list will always hold a special place in the hearts of Blue Jays fans everywhere. From Dave Stieb and George Bell laying the groundwork for a winning culture in Toronto in the 1980's, the glory years with Alomar and Carter in the early 90's with back-to-back championships, to all the lean years with Delgado and Halladay trying to resurrect the franchise, all 10 of these guys will never be forgotten in Toronto.

With the most recent success of back-to-back appearances in the ALCS in 2015 and 2016, Blue Jays fans across Canada have fallen in love with this organization all over again and it will be interesting to see if this recent success is a precursor to another World Series victory like the playoff heartbreak for Toronto in the late 1980's was to the 1992 and 1993 championships.

Baseball bettors who have a soft spot in their hearts for Toronto are very interested to see what kind of shape the team takes in 2017 and beyond. Toronto has shown that they are ready to be an annual contender again, but with the possibility of Jose Bautista and Edwin Encarnacion leaving for other cities in the winter of 2016 means that the Blue Jays that everyone has fallen in love with again the past two years could look drastically different in the very near future.

That wasn't necessarily a bad thing in the early 90's when Bell and Stieb either left or started to trend downward at the end of their careers, and the 2017 Blue Jays will still have a solid core with the likes of Troy Tulowitzki, Russell Martin, a deep starting rotation, and the 2015 AL MVP Josh Donaldson. Even if Bautista and Encarnacion depart, special things could be in store for Toronto soon and MLB bettors will have no problem backing this team along the way.