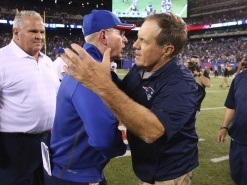 A great NFL head coach is one of the most important parts of a championship quality team. Their ability to draw up creative plays, make smart decisions and install a playbook that maximizes the team strength all contribute to turning an average coach into a great one. Through 50 plus Super Bowls, 13 coaches have won multiple rings as a head coach. Here are the 13 coaches with multiple Super Bowl wins.

While quarterback may still trump anything else in football, a great coach can help franchises lacking in that department become strong teams and aid in the development of young/inexperienced players. Many of the worst franchises suffer through years of instability at the coaching position, having coaches only last for a few seasons at most. The instability hampers development of players, causes teams to reshuffle their personal and adopt a new playbook more frequently than necessary. In fact, the Pittsburgh Steelers have won the most Super Bowls in NFL history and have only had three head coaches since 1969.

Currently, seven coaches in the National Football League have more than 100 career wins, but only Bill Belichick has won multiple Super Bowls. Pete Carroll, Mike McCarthy and Mike Tomlin all have one Super Bowl, while John Fox, Andy Reid and Marvin Lewis are a combined 0-3 in the Super Bowl. Winning a Super Bowl is a great way to guarantee job stability, a coach with an ability to assemble a consistent winner is the number one priority for many teams.