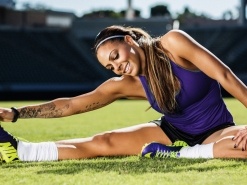 The 2016 Rio Olympics is underway and one of the star attractions is women’s soccer featuring the indomitable US Women’s National Team. The team will however be missing one of its key pieces: forward Sydney Leroux who will be giving birth to her first child with Sporting Kansas City’s Dom Dwyer. The MLS Cup-winning forward is English but is eligible as a domestic player for the US. While Leroux will be sitting on the sidelines, she will be fervently cheering for her teammates.

Sydney Leroux will be back with the USA Women’s National Team sometime in the near future. But even without her, Team USA should roll. The team is one of the most dominant soccer teams in American sports history and is a favorite in the 2016 Summer Olympics. You can also catch them in major international tournaments or games like the World Cup or CONCACAF.

My Team's Next MatchUSA (W)

Dom Dwyer and Sporting Kansas City are in current MLS action as the second-half of the season rolls. Sporting KC is in playoff contention but have a tough road ahead of them. You can bet on both the MLS and international soccer games under the soccer or football sections of our sports books, which provide you competitive odds and signup bonuses

My Team's Next MatchSporting KC