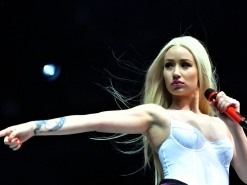 Amethyst Amelia Kelly better known as Iggy Azalea is Nick "Swaggy P" Young's ex flame. Better yet, she's an internationally acclaimed rapper, singer, actress, songwriter, model and director. Moving to the United States from Australia at the age of 16 to pursue a career in hip hop, Azalea has since become one of the more universally recognizable female music artists today. [+]

She has been nominated multiple times for awards in prestigious ceremonies like the Grammy Awards, MTV Video Music Awards, and Teen Choice Awards.

Swaggy P Turned It Over On Iggy Azalea

Bet On Nick Young and the Young Lakers

Camera and snitching scandals aside, the Los Angeles Lakers are looking like a top contender for most surprising NBA team this season. With 10 wins in their pocket already, the Lakers are just seven away from tying their abysmal season last year. Rejuvenated by the addition of former Laker Luke Walton as head coach and the departure of Kobe Bryant, the Lakers have a new identity and don't have the Kobe farewell tour to distract them. Led by rising star DeAngelo Russell, the Lakers have a glut of young talent from Jordan Clarkson to Julius Randle to Larry Nance Jr.

Watch out for the Lakeshow!

As the Lakers continue to wow fans, bettors look to them as a sharp underdog bet provided the oddsmakers maintain a cautious read on them. With the constant shifting of the NBA's Western Conference, rising teams like the Lakers are a welcome sign. The NBA season continues towards the holidays were a lot of key matchups will determine the pecking order. Head over to our recommended bookmakers to get in on the action. The odds are the best and there are plenty of betting options. Signup bonuses of up to $200 also await the new players.