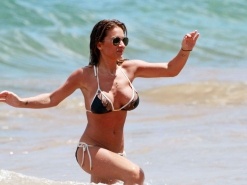 The Summer Olympics in Rio came to an end, the sports world now turns their attention to the rapidly coming 2016 NFL season. America’s most popular sport is just a few weeks away from returning and one of the teams to watch out for are the AFC East’s New York Jets, which features star-receiver Eric Decker looking to have another impressive season. The Minnesota Golden Gopher is entering his third year as a Jet and is coming off his third-best season. Cheering him on will be his talented and beautiful wife, Jessie James Decker.

James Decker is a budding celebrity star with reach in music, fashion and social media. Eric Decker isn’t doing badly for himself either. Despite having his senior season cut short to surgery, Decker was drafted 87th overall in the third round by the Denver Broncos. He had a breakout season in 2012 when he led the American Football Conference in receiving touchdowns and had his first 1,000-yard receiving season. Following a career-best 2013 season, he signed a lucrative deal with the New York Jets in 2014 and had his third 1000-yard receiving season in 2015, a feat he’ll look to duplicate as the new season approaches.

Decker and the Jets can be found on the football/NFL betting lines in our sportsbooks, which offer the best wagering prices on top of a heap load of different props and a signup bonus to start. The NFL continues to be exciting and unpredictable and as one of the most watched sports in the world, it is also one of the most gambled. Don’t miss out on plenty of opportunities to win money along with (or against) Decker and the Jets.