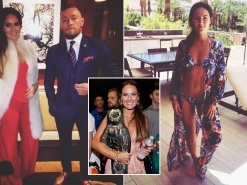 Within the span of three years, McGregor pushed himself to the top of the UFC scene combining his dazzling fighting abilities with his entertaining demeanor. Now he's set to rake in his biggest payday by starring opposite the greatest boxer of his generation, Mayweather Jr., in a mega fight. It's unheard of and McGregor has a laundry list of people to thank but his partner, Dee Devlin should be the first.

The yin to McGregor's yang. Devlin stands out for her subtlety and is a stark contrast to her partner's brash showmanship. Devlin isn't a typical sports WAG.

While she nails the looks department, she's been with the Notorious one since his early days. She's kept a low profile despite her social media accounts blowing up and she's likely been approached to do several photo shoots and gigs but Devlin is steadfast in being McGregor's better half especially now with the birth of their son. Their love story was simple but profound.

It isn't difficult to understand how Devlin can be so taken by McGregor and vice versa. But their charm extends beyond each other and is most notable how the Irishman's hordes of fans swarm to his defense. McGregor just has that ability to inspire confidence in people and leads even the most rational men and women to become emotional.

These same fans flock to online betting sites and whether it's a mega boxing fight or a UFC bout, they're in the know. A signup bonus is icing on the cake. Be wary betting on McGregor or any other superstar for that matter. Even McGregor's opponent, Mayweather can still lose.

Betting on emotion is one of the most common ways to bet. It's also the most common way to lose. McGregor will be fighting the best boxer as a newbie and he's proven naysayers wrong so many times but in a different sport. While crazier things have happened, throwing money at McGregor out of blind faith can be reckless. Do your due diligence as he does his.