Historically and in recent years, the Santa Anita Derby has produced more than its share of Kentucky Derby winners. I'll Have Another (2012) and California Chrome (2014) both pulled off the double, and there's still plenty of room for an up-and-coming colt to emerge from this field given the absence of upper echelon talent in this year's three year-old crop.

While the 2017 Santa Anita Derby appears to be almost anyone's race on paper, shrewd handicappers may be uniquely positioned to find value by digging a little deeper.

In short, we are taking a stab at Reach the World because we feel there's a lot of potential and value here. The recent workouts suggest he's on the uptick and it doesn't hurt that Hall of Fame jockey Mike Smith lands here after piloting the colt in each of his first three races, essentially picking this runner over trainer Bob Baffert's other entry, American Anthem.

Reach the World was getting to Battle of Midway despite a poor start in the March 9 optional claiming event, and should enjoy the extra ground. Iliad is probably the one to beat on form and figures and remains a very logical contender for the top two spots. We certainly can't blame those who choose to back the favorite or play an exacta with our top two choices. Players able to find the right numbers in this excellent betting race figure to be fairly compensated.

Iliad is the lukewarm favorite at 7/2 on the morning line and will break from post 9. On the positive side, this Doug O'Neill trainee has been consistently faster than any horse in this field, recording a trio of Beyer Speed Figures exceeding 90 (92,95 and 96) in his last three races.

Iliad was beaten by 6 3/4 lengths by the unbeaten Mastery in the San Felipe, but that runner would have surely been the odds-on favorite in this field. The San Felipe was also Iliad's first start around two turns and the Santa Anita Derby will represent the third race of his current form cycle - and angle which often produces any runner's top effort.

Gormley and American Anthem ran 1-2 in the Grade 3 Sham Stakes at Santa Anita in January in a thrilling finish. That race was over a sloppy track and both runners came back to run off the board in their next starts on fast dirt with American Anthem finishing a dismal tenth in the Grade 2 Rebel and Gormley fourth in the San Felipe. 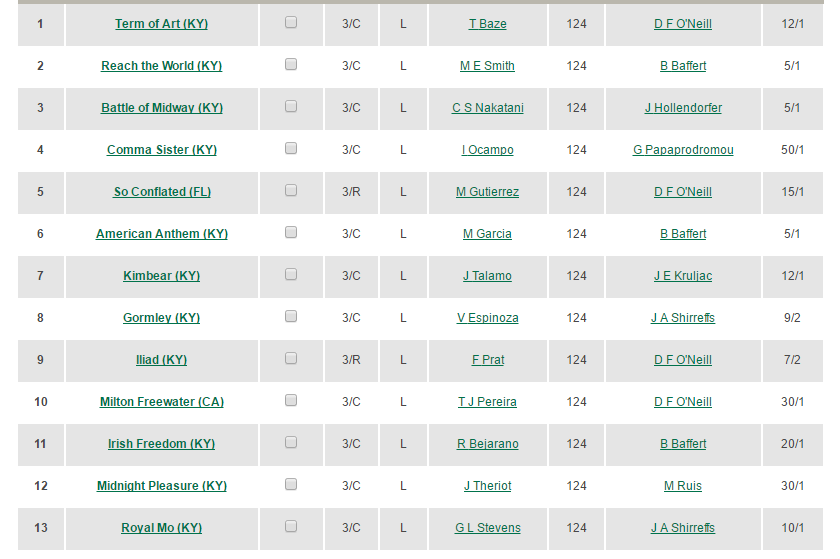 While American Anthem's effort was likely too bad to be true, we're inclined to play completely against Gormley in this spot as the colt doesn't seem to have as much room for improvement as several others in the field. American Anthem likely needs to be on or near the lead to fire his best shot and it's worth noting the regular rider Mike Smith opts to ride Reach the World (5/1).

Reach the World and Battle of Midway (5/1) duked it out in a $75,000 optional claiming race March 9 and both would need slight improvement to factor here. It's worth noting that Battle of Midway was beaten eight lengths by Iliad sprinting in the San Vicente.

This race is likely to confuse most handicappers, so those with a true opinion are well-positioned to capitalize on value. With five runners assigned morning line odds from 7/2 to 5/1, exotics players will likely be dipping from the same well.

Trifecta and superfecta players will want to take advantage of Term of Art (12/1) who appears very capable of landing the third or fourth spot in this event, but remains unlikely to win. If Iliad stays close to his 7/2 morning line, we believe he represents fair betting value, and the improving Reach the World could drift up from his 5/1 morning line, which would also be a good grab.

Did you enjoy this article? Share it!
Tweeter
Follow us!
More articles...
More news - 16/06/22
Ottawa Titans finally made franchise debut

It has been a long time coming for pro baseball to make its way back to Ottawa. Fortunately for baseball fans everywhere, the news that the Ottawa Titans finally made their franchise debut arrived earlier this spring, and thousands of people were fired up about it. The Titans were announced as a new team in […]

Canadian fans are loving their team right now, as the World Cup is getting closer and closer. With that said, the news came in that Canada canceled a controversial friendly soccer match with Iran earlier this month, and it was a move that countless people were calling for. It's no secret that there's plenty of […]

After a strong performance in the 2022 Winter Olympics, some of the best Canadian athletes are all set to take their talents to the next level once again. That's right, with Canada poised to perform at the 2022 Commonwealth Games, there are some big expectations for the country's participants as a whole. So, who will […]

The landscape of online gambling being legalized in the province of Ontario has completely changed the game for Canadian gambling as a whole. It's been great to see, and with that, it should be no surprise at all that online Canadian casinos growing in popularity since being regulated has made plenty of headlines. People are […]