10 Players Who Cheated Worse Than Brady 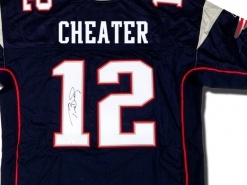 When Al Davis became the owner of the Oakland Raiders in the late 1960's he would eventually put up a sign in the Raiders locker room that had a list of "rules" for the team to follow. The list had two rules that said "Rule #1: Cheating is highly encouraged. Rule #2: See Rule #1." The Raiders have always been known as a franchise that has no quarrels about pushing the boundaries of the rules, but in the wake of the "Deflategate" scandal by Tom Brady, we thought it was best to look back at some of the biggest cheaters the NFL has ever had.

NFL Cheaters That Got Caught

As the old saying goes, "if you're not cheating, you're not trying" and all 10 of the players and teams that made this list made sure they followed that mantra at least for one day.

Steroids ran rampant through the NFL in the 1980's and there could have been an entire list devoted to that, or simply devoted to all of the Oakland Raiders or New England Patriots documented cheats, but this list touched on a little bit of everything now that Tom Brady's Deflategate scandal has officially run it's course. Don't be fooled, there is still plenty of cheating going on in today's game as players and teams look for every conceivable edge they can get to win games in the NFL without getting caught.

NFL bettors everywhere definitely have a bad beat story or two where they felt like their wagers were 'cheated' out of a victory. Most of those result from horrible or controversial refereeing decisions that occur like that of the "Holy Roller" game mentioned in the list.

It's almost comical at times how many NFL games come down to a questionable call at a critical point in a game and as a bettor you just have to hope that you either didn't wager on that game or were at least on the right side of the "cheat."