10 NHL Trades That Helped Both Sides 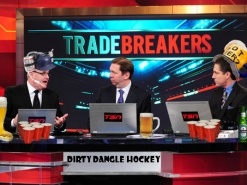 THe NHL Trade Deadline day has become almost a defacto national holiday in Canada each year as every team in the league positions themselves for either a run at the Stanley Cup or building for the future. There aren't too many deals on deadline day that are extremely beneficial to both sides because of the defined "buyer" and "seller" roles, but over the course of history there have been plenty of NHL trades that helped both sides. This list takes a look at some of those that benefitted both sides, even if they are a bit controverisal for some fanbases.

When you look back 10-20 years over any era of the NHL, it's interesting to see just how much franchises can change their fortunes for years with one big trade decision. The entire NHL was affected for the better by the Wayne Gretzky deal alone with that move essentially paving the way for California teams like San Jose and Anaheim to enter the league.

Others like the Eric Lindros deal saw immediate results for both franchises, while others like the Rick Nash deal or the Phil Kessel trade saw individual results by those players show successful deals can come without many wins as a franchise.

Handicapping trades is difficult at the time of the deal because it's hard to know exactly how a key guy will react in a new role on a line with new teammates. Typically it's nice to see a game or two from the new acquisition before strong wagers can be made on said team and that's alright. At the same time, some bettors subscribe to the strategy of going against teams right after they trade for a superstar because the adjustments that have to be made there are greater.