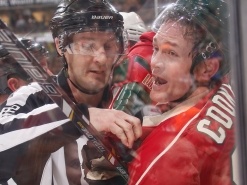 Having an agitator on your NHL team used to be a big part of the game, but it's died a slow death in recent years. However, there are still plenty of players that have no problem crossing the line with their actions or words on the ice, and many of them just happen to be from the Great White North. This list looks at 10 Candian-born NHL players past and present that hockey fans from the nation would glady forget that the red and white maple leaf is the flag they fly at home.

Most Hated NHL Players From Canada

With the bulk of the players on this list always finding themselves on the list of most hated NHL players, Candian hockey fans are glad many of them aren't around or have minimal roles in the league today. The NHL in 2016 has morphed into a skill and speed game where constantly pushing the envelope with dirty play is not welcomed. While guys like Corey Perry and Marchand are the two on this list that can still produce at a high level, all it takes is one incident by them for fans to selectively forget about all the good they've done.

Handicapping NHL games on a nightly basis already brings enough unique problems bettors have to navigate through, so worrying about agitators and dirty players like the ones on this list aren't a big concern. But, at the same time these guys can change games with despicable actions when they snap and bettors better hope when those scenarios happen that their bet is on the right side of the outcome. Chances are this list will get shorter and shorter as years go on with the skill and speeed involved in today's NHL.