10 Cities That Need An NBA Team 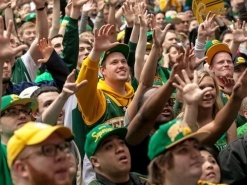 NBA expansion and relocation is always a hot button topic every year as it seems inevitiable that the league will expand at some point. With the huge television contracts the league has signed recently to grow their game and create a huge influx of cash - more money going to owners, players, and the league - adding another NBA team or two would definitely keep the NBA's money train rolling.

Cities The NBA Derserves To Give A Franchise To

Here we've got 10 cities in North America that deserve to be included on that expansion list as basketball fandom is large and vocal in these areas.

There is no doubt that the top three cities on this list (Las Vegas, Vancouver, and Seattle) should be considered the front runners to land a NBA franchise should/when the league decides to expand. The NBA has already ventured into two of them in the past and while they didn't end up working at the time, there is zero chance those cities (Vancouver, Seattle) would not ramp up their support to avoid the same thing happening twice. Las Vegas is a new area that would also see basketball fans, and sports bettors, flock to a NBA team and since the NHL was the first to make the move, it's likely that the other pro sports leagues - including the NBA - do not want to miss out on their piece of the pie in the Las Vegas.

League expansion always adds an interesting dynamic to sports betting because it often takes at least a year or two before expansion teams are relatively competitive. That means that should the NBA decide to give one of these deserving cities a team in the near future, basketball bettors should be prepared for lofty underdog spreads on this new team and adjust accordingly. This is one of the biggest hurdles to expansion these days as leagues do not want to wait years before the new team is "good" because that will hurt their bottom line for too long a period. But bettors can improve their own bottom line on these games with situational handicapping methods that can prove very profitible with lofty point spreads and money line prices cashing in the right spots.