10 Boxers Made of Iron 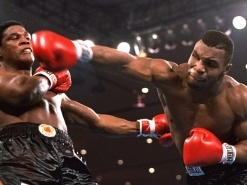 Boxing may not have the enormous popularity worldwide as it enjoyed in past decades right now, but there is no denying that the sport has given the world some of the toughest people to ever walk the earth. The sport is a brutal one so boxers better be built physically and mentally to endure everything that's thrown at them in the ring, but throughout the eras there have always been a few guys that stood head and shoulders above the rest. This list looks at 10 boxers who were built like iron with phenominal physiques, extraordinary punching power, and the iron-clad jaws that could take hits from the best of the best.

Nearly all of the boxers that made this list have made the Hall-of-Fame as they all experienced (or are experiencing) tremendous success in the sport. The knockout power guys like Tyson, Frazier, Cesar Chavez and Marciano had were second to none during their era and going up against them truly was like fighting a heavy piece of iron that would slug you back. Many of these guys changed the face of boxing in their own unique way, and did so by displaying their iron-like physiques and strength to dominate the competition.

Betting on boxing these days is a little tougher than it was a few decades ago because the sport isn't nearly as publicized as it once was (aside from Floyd Mayweather fights) and has taken a back seat to MMA bouts today. But make no mistake about it, the sport still has some specatuclar fighters within the ranks at various weight classes and sportsbooks still write plenty of tickets on matches every month.