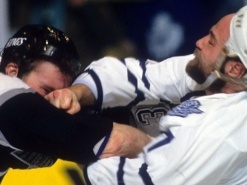 Mean NHL players come in all shapes, sizes and positions and this is one of those lists that tries to encompass it all. We've got all-time leaders in penalty minutes, goalies who weren't shy about laying the lumber, and even an all-time great who was known as "Mr Hockey" and hockey's worldwide ambassador during the bulk of his decades-long career. These guys all had one common trait though and that's that they were never shy about playing with a "take no prisoners" attitude on the ice and looked to intimidate and dominate through physical play.

The NHL has been a different league since the 2004-05 lockout as it's really shifted to a game all about speed and skill. Fourth liners and established enforcers are a way of the past and it's a big reason why we see nearly everyone on this list have some playing time during the 1980's. That's the decade where the NHL was like the Wild West out there, allowing players to enforce their own code in their own way. All 10 of the guys on this list showed their mean streaks in different fashions, but the ability to use their physicality as a weapon of intimidate couldn't be ignored.

Since today's game is so much different then the era's involved in this list, it's tough to even consider or compare today's "mean" players with ones from the past. Yet, from a handicapping perspective, the shift the NHL made in becoming a skill and speed league means there are more "knowns" out there for bettors in terms of figuring out what to expect from a team and a game.

No longer are big bruisers like Bob Probert going out there for eight minutes a game to skate around and stir up trouble, meaning there is more shifts now available for the top scorers to produce goals and winning bets.